The pup seen ‘round the world

She was left outside the Shelby Humane Society in Columbiana after closing hours on Sept. 27, 2012. The dog is likely a lab mix and would have been about a month old at the time she was left at the shelter, according to SHS Executive Director Sara Shirley. 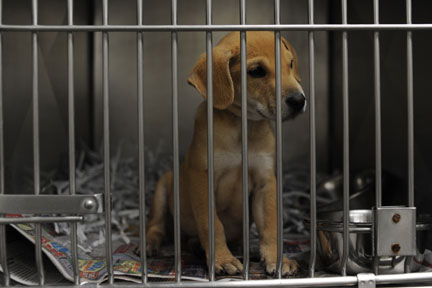 This is what I wrote: “The little guy in this picture was a resident of the Shelby Humane Society this fall. For every “like” the Shelby County Reporter receives, we will donate 5 cents to the SHS. Please support this wonderful cause.”

An hour later, the SCR’s Facebook page had received 100 likes. By the time the campaign ended in early 2013, the photo had received 220,591 likes from around the world, and 4,941 people shared the post.

Since the post was not very clear, not all of those people went on to like the Shelby County Reporter’s Facebook page, although we wrote additional posts asking commenters to actually like our page, not just the photo.

The campaign actually included all five of our company’s Facebook pages, and we were able to write a $255.80 check to the SHS early this year.

We were still curious about the fate of the dog in the post that went viral. Many of the 1,475 comments we received on the post inquired about the dog too.

After checking with Sara Shirley, I am happy to report that Supergirl was one of the lucky dogs that participated in the SHS’ “Shelter Partners” program, which sends dogs to shelters in the Northeast, where there are fewer animals available for adoption. She was adopted by a family after going on transport to the Greater Androscoggin Humane Society in Maine on Nov. 2, 2012.

Wherever her home is now, I hope Supergirl is having the time of her life.

Katie McDowell is the lifestyles editor for the Shelby County Reporter. She can be reached at katie.mcdowell@shelbycountyreporter.com.