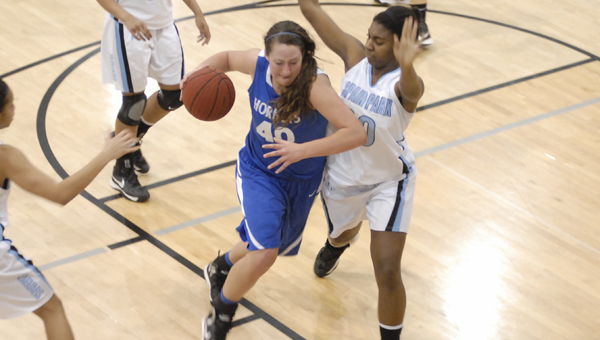 Chelsea senior center Amanda Mock drives to the basket in the Lady Hornets area tournament game against Spain Park. Mock is the 2012-2013 girls’ basketball Player of the Year.

Mock accounted for over 1,000 points and 1,000 rebounds in her four-year career at Chelsea and is the 2012-2013 Shelby County Reporter girls’ basketball Player of the Year.

“She is a well-rounded athlete that has incredible focus and drive,” Chelsea head coach Michelle Edwards said. “She has enjoyed success and persevered through the struggles that a basketball season can throw at her. What I think is impressive is the entire package of her impact in a game along with her character socially and her excellence in the classroom.”

Mock’s statistics on the court are staggering. The Chelsea senior totaled 1,360 career points and 1,037 career rebounds — both of which are Chelsea school records. She averaged 15.3 points and 11.7 rebounds per game in her senior campaign.

“This is a special feat that is just testament to Amanda’s determination to reach a set goal,” Edwards said on the career marks set by Mock.

Edwards said that Mock has all the tools to succeed at the collegiate level.

“She is a strong student that makes wise decisions outside of school in order to maintain her goal of playing collegiate basketball,” said Edwards. “I believe that she will work hard at any program in which she becomes a part to improve her game. I believe that she can make an impact wherever she decides to play.”

Mock has not only made a positive impression on her coach, teammates and college coaches, but opposing coaches as well. Numerous coaches across the county featured Mock on their nominations for the all-county team.

Edwards said that Mock has not only impacted the Chelsea basketball program now, but has set a standard for the future.

“Amanda was an important asset to the team this year on the court and off the court,” said Edwards. “She has helped lay a foundation for the future of Chelsea girls basketball.”

FROM STAFF REPORTS The Chelsea Hornets scored three unanswered goals to take a 3-1 victory over the Westminster School of... read more