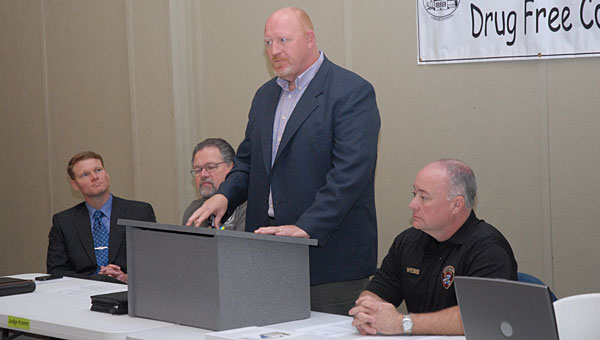 Shelby County and central Alabama are seeing a spike in opiate abuse and opiate-related deaths, a community representative from Bradford Health Services told the county’s Drug Free Coalition during a March 14 meeting.

During the meeting, which was held at Family Connection in Saginaw, Bradford community representative Lonnie Layton discussed trends the drug treatment organization has observed over the past few years.

“Seventy-seven percent of the people we admit are addicted to opiates,” Layton said. “There is an opiate epidemic right now, and people are dying.”

Opiates include drugs such as heroin, hydrocodone and Lortab, and were once uncommon in Alabama, Layton said.

“For years, we rarely saw a heroin addict in Alabama,” Layton said.

Opiate addiction can stem from the extended use of some doctor-prescribed pain killers, as users often quickly develop a tolerance to the drugs. A user can become physically dependent on an opiate after taking it for 30 days, and Layton said the “number-one opiate withdrawal symptom” is lower back pain.

The recurring lower back pain can further the problem, as users often continue to take the opiate to fight the chronic pain, and often increase their doses over time, Layton said.

“It’s something that is taking us by storm,” Layton said, noting opiate addiction primarily affects ages 19-25.

Webb said the task force has investigated a similar number of drug-related cases during the first few months of 2013 as it did last year, but said the number of drug confiscations have risen since 2012.

Layton said opiate addiction can have a negative effect on entire families, and said Shelby County has many rehabilitation programs designed to help those struggling with addiction.

“We’ve got to reach these people, because people are dying out there,” Layton said.