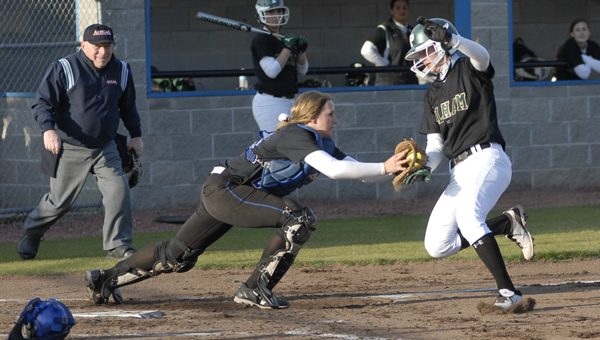 CHELSEA – The Chelsea Hornets softball team fought back from a 3-run deficit to tie Pelham, but the Panthers’ Madi Walker gave her team the lead in the final inning of a 9-5 victory March 14.

The Hornets (6-8, 0-2) closed the gap in the bottom of the third on a pair of RBI singles by JoJo Johnson and Maygen Boaz-Jeffords to make the score 3-2 after three innings of play.

Caitlyn Davis led off the fourth with a single and tied the game on a wild pitch to swing the momentum in the Hornets’ favor. With two runners on, Alexandria Smithson cleared the bases with a single up the middle of the infield to give Chelsea its first lead of the game, 5-3 after four innings of play.

The Panthers didn’t allow Chelsea to hold the lead for long. Walker drove home a run on a RBI double and Pelham added another run on a sacrifice fly to even the game 5-5 after five innings of play.

The score stood until the decisive seventh inning. Walker gave Pelham a 6-5 lead on a solo home run to left-center and set the pace for the rest of the inning. Pelham had five hits in the inning and scored four runs in the inning to take the 9-5 win.

Walker led all batters finishing 4-for-4 with two doubles, a home run, three RBIs and a stolen base for Pelham. Kristian Foster added a 2-for-4 effort with a triple and two RBIs. Krista Shirley finished 2-for-2 with a RBI for the Panthers.

JoJo Johnson led Chelsea batting 1-for-1 with a triple, walk and a RBI. Smithson finished the game 1-for-2 with two RBIs.