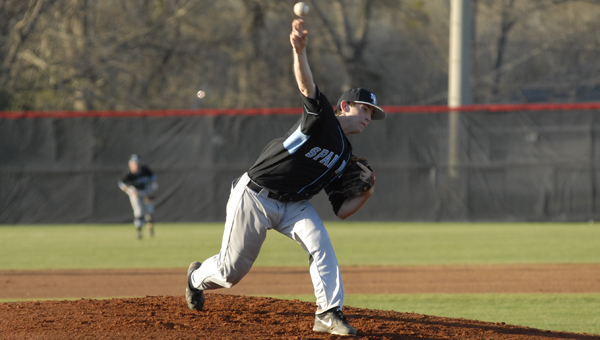 ALABASTER – The Spain Park Jaguars kept their non-area contest against the Thompson Warriors close and took the lead in the seventh for an 8-7 victory March 16.

Thompson (19-7) scored a pair of runs in the second and third innings to take a 4-2 lead. Spain Park (12-7) answered four runs in the top of the fourth led by a two-run double by Peyton Walsh to give the Jaguars a 6-4 lead.

The Warriors tied the game 6-6 in the bottom of the fourth when Blake Grill hit a two-run single to bring home Dee Tolbert and Trey Matherson.

The tie stood until the bottom of the sixth when Thompson took the lead. Tolbert led off the inning with a double to left, and then scored on a sacrifice fly by Matherson for a 7-6 Warrior advantage.

Spain Park rallied in the top of the seventh when Josh Close led off with a single to right for the Jaguars. Grant Veteto followed with a double to center to bring home Close while tying the game 7-7. One batter later, Josh Rich drove home Dalton Brown to give the Jaguars an 8-7 lead.

Josh Rich took the mound for Spain Park in the bottom of the seventh and retired Thompson in order to give the Jaguars the 8-7 win.

Rich picked up the save for Spain Park while Matt Berler threw two innings in relief while allowing one run on one hit.

Drew Avans took the loss for Thompson allowing two runs on two hits with six strikeouts and a walk.

Close and Walsh each went 2-for-3 with two RBIs for Spain Park. Veteto went 1-for-3 with a double and two RBIs.

Matherson finished the game 2-for-2 with two doubles and a RBI for Thompson. Tolbert added a 2-for-2 effort with a double and two runs scored. Grill was 1-for-2 with two RBIs for the Warriors.

FROM STAFF REPORTS The Thompson Warriors scored seven runs in the last four innings to take an 8-3 victory over... read more