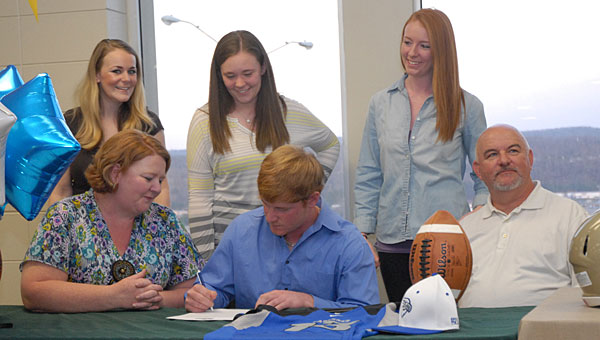 PHS senior Eli Beall, center, is surrounded by his mother, Becky, father, Larry, and sisters, Taylor, Chelsea and Meaghan during a March 15 signing with Faulkner University in the school’s cafeteria. (Reporter Photo/Neal Wagner)

The holder of Pelham High School’s single-season rushing record will continue his journey at the next level after signing a football scholarship with Faulkner University on March 15.

PHS fullback Eli Beall inked with the university during a ceremony in the school’s cafeteria as he was surrounded by his mother, Becky, father, Larry, and sisters, Taylor, Chelsea and Meaghan.

Dozens of Beall’s teammates, coaches, family members and friends also packed the cafeteria during the ceremony.

Beall said he chose the Montgomery-based Faulkner University after enjoying the school’s atmosphere during a campus visit.

“I want to thank all my teammates for always believing in me,” Beall said during the signing.

FROM STAFF REPORTS The Oak Mountain Eagles outscored their opponents 22-3 in two victories at Stanhope Elmore March 16. The... read more