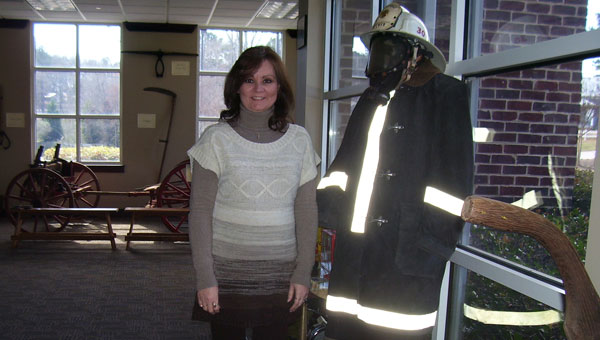 The fire gear on display in the Chelsea museum was worn by Bill Weldon, said Ricky King, a long-time member of Chelsea Fire Department.

“But several others wore them, too, including, but by no means limited to, Verne Craig, Stan Chesser, Bill Weldon, Lanny and Alice Hudgins, Bobby King, Don King and Al Limbaugh,” he said. “I have a picture from a newspaper article with my dad wearing one just like it around 1978.”

Ricky said he is working with some of the original members to put together a list of all the early Chelsea firefighters and facts, and then write a good recorded history for the fire department.

“I grew up being a part of the fire department,” he said. In the old newspaper photo, Ricky and his cousin, Johnny King, (Retired Msgt, USAF) were holding a fire hose, with the help of his father, Rusty King, and Stanley Chesser. The picture caption says the youngsters were chosen to “do battle with opposition.”

The Chelsea Volunteer Fire Department was started by the Jaycees 36 years ago this month, in March 1977, Ricky said.

The late Verne Craig was the first fire chief and was chief for many years.

Ricky said that in the early years, the fire department used a tanker truck for shuttling water for fighting fires.

Since there were so few fire hydrants back then, they would draft from lakes and then shuttle the water to the fire scene.

For several years, they brought the truck down to our lake (Nivens Lake) and drew out water for practice or an actual fire.

Chelsea’s early fire gear, and other fire department relics are on display in the Chelsea museum, along with other memorabilia from life in early Chelsea. Historical research materials can be viewed on computer and hard copy.

The museum is located in City Hall and is open by appointment. For assistance, call 678-8455.