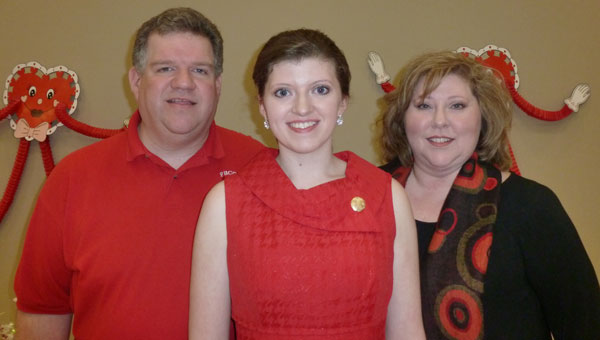 Isabella Powell with her parents, Charles and Katherine Powell, at the Saints Alive luncheon at the First Baptist Church of Columbiana. (contributed)

Isabella Powell is a beautiful, talented sophomore at Calera High School with a heart-felt mission: to bring awareness of the heart calcium scoring test to detect early heart disease and to implore insurance companies to cover this non-invasive, inexpensive test that could save lives.

Powell, an “At Large” contestant in the Miss Alabama Outstanding Teen Pageant in March 2013, has chosen this cause to be her platform, Heart to Heart, because of her first-hand experience of losing many family members through heart disease.

Isabella is the 16-year-old daughter of Katherine and Charles Powell, minister of music and administration and minister of senior adults at the First Baptist Church of Columbiana. Charles organizes many programs working with seniors at First Baptist: Saints Alive, lunch and program every second Tuesday of month at 11:30 a.m.; field trip outing every fourth Tuesday; and senior adult choir, “Joyful Sound,” that meets every Monday at 1 p.m.

Isabella recently spoke at the Saints Alive luncheon. She told the group about her recent visit to the House of Representatives in Montgomery to urge lawmakers to support coverage of the calcium screening test by insurance companies.

“The calcium screening test costs $100 versus the $2,500 cost of an arteriogram,” said Isabella. “This test is especially needed for young and middle age adults to predict if they are a high risk or no risk for heart disease.”

The Senior Program at First Baptist Church of Columbiana is open to all ages 55 and over. For info call the church at 669-3128.

Lawson has plans for the Columbiana Library