Loving the skin he’s in 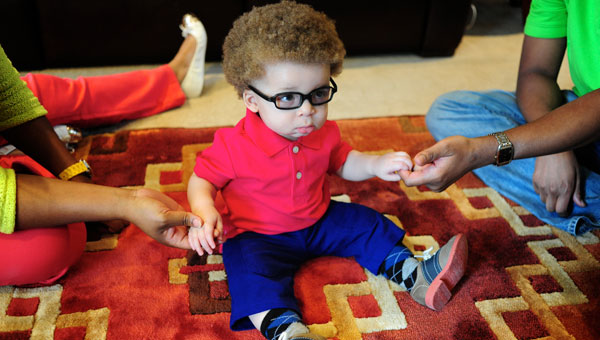 Noah Miller is 10 months old and has albinism, a genetic condition that causes little or no pigmentation in his skin, hair and eyes. (Reporter photos/Jon Goering)

Hoover resident Niya Pickett-Miller says her 10-month-old son, Noah, has her nose. Her husband, David, thinks Noah looks a lot like his own baby pictures.

However, there’s one trait Noah doesn’t share with his parents or with his sister, 5-year-old Nalla. Where Niya, David and Nalla have chocolate-brown skin, Noah has pale skin — even more pale than many Caucasians.

Noah has albinism, a genetic condition that causes little or no pigmentation in his skin, hair and eyes. Albinism can also cause vision problems, so little Noah wears glasses to help with his nearsightedness, strapped to his face so they will stay on.

Noah’s eyes and skin are sensitive to light as well, so his glasses have lenses that darken when he goes outside, and sunscreen is a requirement. 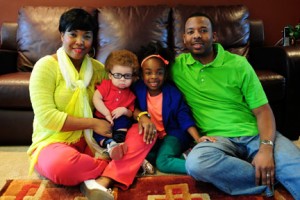 Niya said Noah was not officially diagnosed with albinism until he was four months old, but she noticed the differences long before.

“I did notice something different because he was so light-skinned,” said Niya, who added that she and David chose to wait until Noah’s birth to know if he would be a boy or a girl. “His gender and his appearance were a surprise.”

When Noah went in for his four-month checkup, his doctor noticed some irregular movement in his eyes, which constantly move side-to-side. The doctor asked that Niya and David take Noah to a pediatric ophthalmologist, and upon checking out, Niya learned — by reading Noah’s checkout sheet — that the doctor suspected her son had nystagmus.

“I saw that and I immediately called David, and I was pretty scared. We looked up the word and we freaked ourselves out,” she said. “Now we know nystagmus can mean any irregular eye movement.”

Noah’s ophthalmologist told the family Noah had albinism — something Niya and David had never expected and, in Niya’s case, something she had never seen before.

“From there, it was kind of a grieving process,” she said. “Every new mom wonders, ‘Is it a boy or a girl?’ I would just imagine my baby. I didn’t imagine a genetic issue, or any issue. I guess I just grieved the idea of having, in my mind, the perfect child.”

David said he immediately worried about Noah’s eyesight and his future.

“I don’t have albinism, but my eyesight is not the best,” David said. “Our two concerns were his eyesight and whether he could see at all, and the social stigmas.”

Niya quickly came to grips with the situation and made it her mission to learn all she could about albinism.

“It is what it is. This is my son and I love him. The best way I can deal with my fear is to educate,” she said. 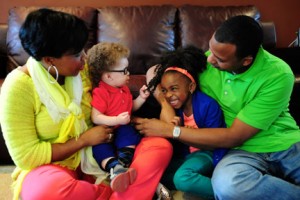 Noah is a typical 10-month-old — especially when it comes to how he interacts with his sister.

Niya’s research led her to a support organization ironically called NOAH — the National Organization for Albinism and Hypopigmentation.

David said finding others who struggled with the same reality offered hope and comfort.

“We got a link, and the tears came down at that time,” David said. “I knew she was looking for some help that I could not provide.”

However, even though Niya and David had the information they needed, they realized that others needed to be educated too.

“We would go out, go to Target. People mean well. They love babies, but people would say, ‘Where did he get that blond hair?’ ‘Is he yours?’ ‘Is his dad black?’” Niya said.

David said NOAH actually provides families dealing with albinism with cards they can hand to anyone who has questions, explaining albinism and its symptoms.

“We are a family of education. We are going to tackle anything that comes our way, whatever it is,” he said. “I think it’s brought us closer together as a family.”

The family is hosting a fundraiser March 23 at Oak Mountain Lanes in Pelham, called Let’s Bowl With Noah 4 NOAH. The event, which will run from 12:30-2:30 p.m., will help people learn more about albinism in a fun environment, Niya said.

The fundraiser, which will accept donations for NOAH, is part of the organization’s nationwide fundraising event.

David said their goal is to give Noah a community where he can feel loved and valued.

“What we’re attempting to do is build a community that knows what albinism is. He’ll grow up with people who love him and understand,” he said. “We want him and Nalla to know, ‘God made you who you are, and God loves you.’”

To learn more about Let’s Bowl With Noah 4 NOAH or to sign up for the event, call 425-6560 or email niypic@gmail.com.