By HEATHER BUCKNER/Special to the Reporter

The Shelby County Arts Council (SCAC) opened its new performance space in Columbiana on March 16 with a performance by Patsy Cline. 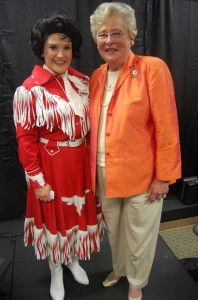 Emily Kay Herring, assistant professor in musical theatre voice at the University of Alabama, brought “Songs of Patsy Cline” to 102 Mildred Street live in costume with a back-up ensemble and a packed house.

Lt. Gov. Kay Ivey congratulated the SCAC on its new addition and welcomed her namesake, Herring, to the stage to sing and dance to songs like “Walkin’ After Midnight” and “She’s Got You.”

“It seems like we whipped everything together so fast. We had so much help, though. We’re really thankful for our volunteers,” Gordon said. “Tonight was fabulous.

“The performer was just as fun as the songs,” she added. “She engaged the audience, too; there were people tapping their feet and shaking their shoulders. I think everyone had a great time.”

Terri Sullivan, founder and executive director of the SCAC, described their first event in the new space as “over-the-top wonderful.”

“It was oversold,” said Sullivan. “We actually had to bring in extra chairs.”

Both Sullivan and Gordon said they were happy with the concert and the turnout.

Herring agreed, saying that she, too, enjoyed the place, the people and her new character.

“Playing Patsy, I feel liberated. I’ve lived in New York, and I’ve sung Broadway, but she brings me back to my country roots,” Herring said. “I feel her music; it pours out of me.”

Herring said she enjoyed performing in Columbiana because it took her back to a time when towns were safe and people were friendly, adding that she would be willing to come back anytime.

The next performance in the new theatre, however, won’t be country, but a blend of blues, rock, funk and gospel. The Shelby County Arts Council will welcome 2Blu & the Lucky Stiffs on Saturday, April 6 from 4:30–6 p.m. Tickets to the concert are $12 and can be purchased online at shelbycountyartscouncil.com.