Young writers get visit from author 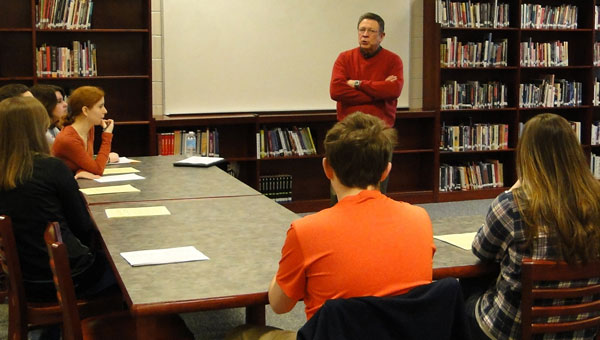 Calera High students in The Write Club and Dr. Mary Rees’ English Class explored their writing careers with novelist, screenwriter and playright Robert Inman. Inman, a native of Elba, began his writing career in seventh grade with his hometown paper.

“I’ve always been fascinated with words,” Inman said. “I worked at the newspaper through high school and disc jockeyed at the radio station. I went to Alabama and studied broadcast journalism and spent most of my journalism career in TV. I left that 17 years ago after publishing a couple of book to write fulltime.”

Prior to speaking to the students, Inman read some of their work. He shared principles for writing. One is a story wheel depicting the central character surrounded by five elements — setting, dialogue, voice, plot and other characters. He said the most important factor to plot in developing the character and telling his or her story is dilemma.

“Character plus dilemma equals story,” Inman said. “If there’s some dilemma a character has to face and deal with, or not, then that’s going to be the crux of the story, the plot and everything that goes on internally and externally.”

“Grants aren’t continually handed out. You have to become self-sustaining,” Roberts said. “We’re looking for aspiring writers who are interested in establishing an ongoing writers workshop.”

Roberts said the group will be paired up with professional writers who will critique their writing and help foster their love for writing. Contact Roberts at 620-6419 for workshop information.