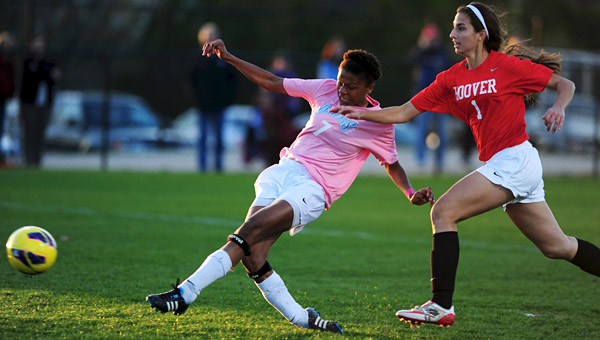 Charley scored two goals in the first 13 minutes and added a penalty kick to earn a hat trick in the Spain Park (10-3-1, 1-0) victory.

“She’s hard to handle for sure,” said Spain Park head coach Robert Starr. “She was able to get a couple of goals early and make things easier on us.”

Both of Charley’s first half goals came on similar plays where she beat the Hoover defenders to the ball and beat the goalkeeper.

Madison Cobb scored with 14 minutes to play in the first half on a ball that looked like a cross that went into the goal to give the Jaguars a 3-0 lead.

“We joked about that and called it a shross – a half shot and a half cross,” Starr said with a smile. “Sometimes they just go in for you and sometimes they go against you. It was a good confidence builder for her, especially being an eighth grader.”

Hoover scored with 11 minutes left in the first half to cut Spain Park’s lead to 3-1 at the half.

Starr said that he was pleased with the effort his team gave in the victory.