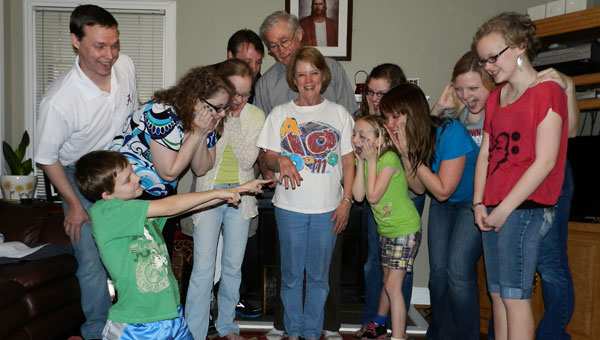 COLUMIBIANA – Thirty years ago, a Columbiana woman pawned a beloved high school ring to purchase Christmas gifts for her three children. Her children recently returned the gift by surprising her with a replacement ring.

“I have a vivid memory when I was 10 of her going to the pawn shop to sell the ring. She always had her (University of) Alabama class ring and ring from Banks High School. I knew she was proud to go to school at both places,” Ricky Harmon said. “In 1982, she had been out of high school for awhile, and she still wore her ring all the time. It meant so much to her.” 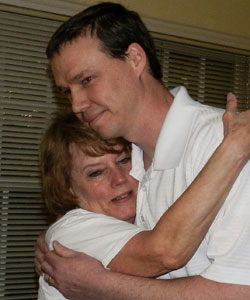 Mary Ellen Harmon hugs her son, Ricky, after receiving a class ring replacing the one she pawned 30 years ago. (Contributed)

Ricky Harmon said he recently began scouring the Internet and talking with jewelers to find a replacement ring. He even called the ring manufacturer, but was told the company destroyed the ring mold after 10 years.

And then fate came into play.

“A letter about her 50th class reunion was mailed to my house. I took the opportunity to open it and got an email address for the woman in charge of the reunion,” Ricky Harmon said. “I told her who I was and what I was trying to do. She sent out an email to everyone in the class. A classmate came back and said she wanted us to have her class ring so we could give that to Mom.”

The classmate shipped the ring to Ricky Harmon in Columbiana, and it was “exactly how I remembered,” he said.

“The stone was the same color. It had the mascot and the symbol on the side. The year was there. It was perfect,” he said.

Ricky Harmon and his brother, James, and sister, Cindy, had their mother’s initials engraved in the ring, and then presented it to her March 17 at her home.

“Needless to say, I was extremely blown away by it. I couldn’t believe I was getting my ring back,” Mary Ellen Harmon said. “It means a lot to me, and not just that I have the ring back.”

Ricky Harmon said he never realized how much his parents sacrificed for he and his siblings while they were growing up.

“She pawned it for us right around Christmas to provide something for Christmas for us,” he said. “I’ve always had that memory of watching her stand there with a guy looking at this ring, which I know was just so valuable to her if for sentiment if not monetary, and he wasn’t going to give her close to what it was worth.

“The only fitting way we as her children could show our love for her now was to restore that ring to her that was so valuable that she still gave it up for us,” he added.