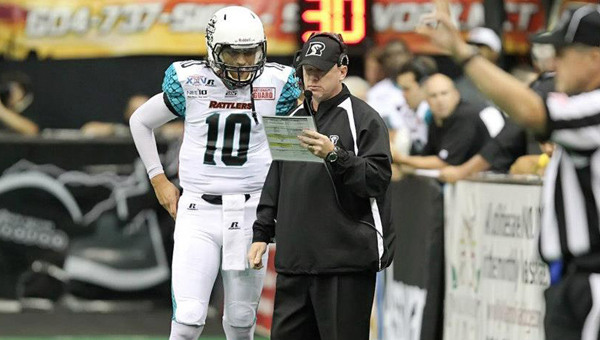 Shelby County native Kevin Guy guided the Arena Football League’s Arizona Rattlers to an ArenaBowl XXV championship in 2012, and will begin his defense of the title when they kickoff the regular season March 23.

Guy — a 1991 graduate of Shelby County High School — played four years in the AFL before his first coaching job in the league in 2000. His coaching career has spanned over 13 years in area football’s highest levels (AFL and af2). He said that his coaching philosophy is based off of coaching people, not just by football plays and schemes.

“There’s a lot of people out there that understand X’s and O’s, but it’s not about X’s and O’s — this whole thing is about coaching people,” said Guy. “I always felt that was my strong point — understanding people.”

Guy said that he has learned from every stop, from his time as an assistant with the New Jersey Firedogs in 2000 to being a head coach with the Rattlers.

“In my first two years, I probably learned more about what not to do than what to do,” Guy said on his coaching career. “It’s a copy-cat business, and I’ve definitely taken a lot from all of them. I’ve formed a lot of my own opinions from my playing days.”

Guy led Arizona to the ArenaBowl — the AFL version of the Super Bowl — in 2011, but suffered a heart-breaking 73-70 loss to Jacksonville.

“I still haven’t gotten over that,” Guy said on the last-second loss. “In fact, I can’t sit down and watch the film cause I get mad when I think about the last play of that game.”

Guy led the Rattlers back to the title game in 2012 and defeated the Philadelphia Soul in ArenaBowl XXV in New Orleans August 10, 2012.

Arizona opens the season March 23 at home in a rematch against the Soul. The season opener is one of four Rattlers games that will be nationally televised by the CBS Sports Network.

While the Rattlers play its home games 1,440 miles away from Columbiana, Shelby County football fans can see Guy and his team play closer to home when Arizona makes two trips to Florida later in the season. The Rattlers will play at Jacksonville on May 4 and will take on the Orlando Predators July 6.

While his career in the AFL has taken him across the country, Guy said that Shelby County is still where he calls home.

“I was one of those guys that never thought I’d leave Columbiana,” said Guy. “I was wrong.”