Barbaree’s story began two years ago when he was staying in the Quality Inn in Pelham while working to sell ads for a company.

“Being away from my home and family and missing them, of course, I realized this would be a perfect time for me to start writing that book,” Barbaree said.

Barbaree, who now lives in Clanton, began to write “Thank God for Boll Weevils” for two to three hours each night.

The novel is based on Barbaree’s experiences of visiting his grandparents at their family plantation in Greenville.

“I keep asking myself, ‘Why did God choose me to write this novel?’” Barbaree said. “I think it’s because of my background growing up on my granddaddy’s farm, my love for history, especially Southern history, and my faith and my love for biblical symbolism and imagery.”

The story, which is written in a Southern dialect, follows two God-fearing women as they grow up on a plantation near Enterprise in the early 1900s.

At that time, the South was plagued by the boll weevil, which destroyed cotton crops.

“Farmers in Enterprise began growing peanuts as an alternative, and the idea was quick to catch on in other states once the market exploded, primarily because of the new uses that George W. Carver was constantly coming up with at that time,” Barbaree said. 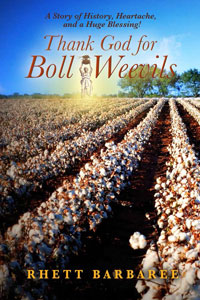 Barbaree first discovered the idea when he was preparing to teach a devotion to a youth group.

“I loved the story because it was Southern and historical, but especially because it so clearly showed God’s hand of providence in the midst of man’s adversity,” he said.

After publishing the book with Tiger Iron Press in Savannah, Ga., Barbaree began selling his novel at Alabaster’s Books-A-Million location.

“I told them about my novel, and they bought five or six copies for stock. They placed them on the front counter with an autograph sticker on them,” Barbaree said.

Later, Barbaree returned to the store to sign more copies, and the store manager told him the store’s employees had voted the book to be the Hand Sale Choice Book to compete against other Books-A-Million locations in the area.

“Each store chooses their own book or item to sell over a period of time – it ends the end of this month – and who ever sells the most wins a contest,” he said.