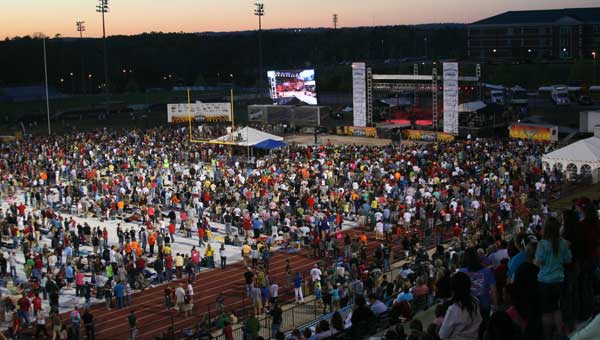 Expect a big crowd at the third StadiumFest at Spain Park High School on April 12-13.

In 2009, StadiumFest, a free Christian music festival, attracted 23,000 people when it was held at Samford University. Two years later, the event moved to SPHS and 39,000 people attended.

Organizer Scott Dawson, a Shelby County-based evangelist, said the only way for the event to grow this year was to add a second day. He credits the show’s line-up, which includes well-known Christian bands and speakers, with drawing a large crowd.

“If you’re looking for a family atmosphere that’s non-threatening, that gives you the opportunity to hear some incredible music and incredible speakers, this is the place to be,” he said.

Dawson said the idea for StadiumFest came to him a few years ago when he realized traditional events “were not as exciting for the masses to attend.” He discussed the idea with Rick Burgess of “Rick and Bubba” fame, and StadiumFest developed from the conversation.

The key to the event’s success – both in terms of number of attendees and encouraging people to convert to Christianity – is filling the schedule with compelling speakers and performers.

“My personal philosophy is I try to surround myself with people who can stock the pond, if you will, because I am a fisher of men,” he said.

Dawson said StadiumFest’s organizers have heard stories from people who said the event changed their lives, including couples who walked away with stronger marriages, drug addicts who were able to stop their addiction and people who learned to let go of guilt.

“Those types of stories are why we do this,” he said.

He said people may be surprised that at the past two events, the first “spiritual decisions” were made not by teenagers but by middle-aged men attending a service with their families.

He also said keeping the event free, even though it costs $400,000 to produce, is key to reaching as many people as possible.

Parking lots open two hours prior to the start of event activities. Seating is on a first-come, first-serve basis. Concession stands, which benefit Spain Park High School, and food vendors will be open.