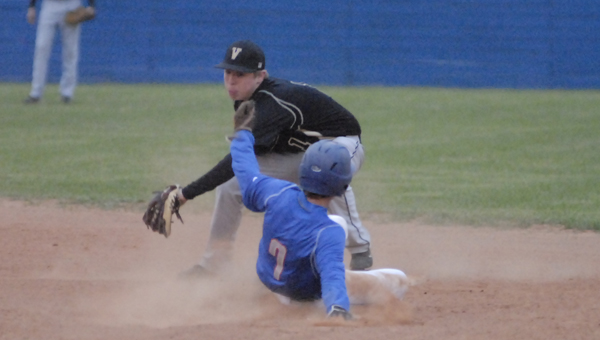 MONTEVALLO – The Montevallo Bulldogs struck for runs in bunches in an 11-1 six-inning victory over the Vincent Yellow Jackets to begin the Montevallo Spring Break Tournament March 21.

Montevallo (16-2) broke a scoreless tie in the bottom of the second while taking advantage of a pair of Vincent errors. Hunter Nabors led the inning off with a double and later scored on a Yellow Jacket error to give the Bulldogs a 1-0 lead. Aaron Terrill and Zach Sweat reached base on a hit and walk respectively to load the bases for Matthew Parker. Parker roped a line drive up the middle that fell in front of a diving Daniel Hawkins, which cleared the bases for Montevallo for a 4-0 advantage.

The Yellow Jackets broke onto the scoreboard in the top of the third led by a one-out walk by Hawkins. Zach Baucom followed with a double to center to score Hawkins, but got caught attempting to take third on the play.

Chase Hamrick led off the third inning for Montevallo with a triple down the right field line and scored on a Nabors sacrifice fly to give the Bulldogs a 5-1 lead.

The Bulldogs’ four-run lead stood until Montevallo erupted for six runs in the bottom of the sixth. Montevallo began the inning with three straight hits to load the bases with no outs. Sweat and Parker each brought home runs on back-to-back walks. Landon Goodwin followed with a sacrifice fly to right to give Montevallo an 8-1 lead. Hamrick hit a two-run single for a 10-1 lead before Nabors hit a RBI double to left to end the game 11-1.

Zach Baucom had the only hit for Vincent batting 1-for-3 with a double and a RBI.

Trevor Chatham picked up the win for Montevallo allowing a run on a hit with six strikeouts and three walks.