By MOLLIE BROWN / For the Reporter

Due to scheduling conflicts, Bachus was unable to greet the band when they performed in January at the presidential inauguration in Washington D.C.

Bachus congratulated the band, then noted the privilege of their participation in the ceremony. 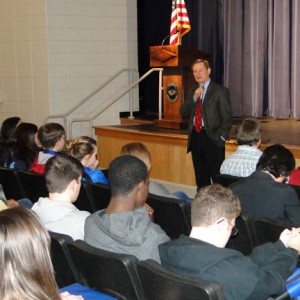 “Marching in the inaugural band, you were participating in one of the oldest, most famous, ceremonies in the world, and that is transitional government at the highest level peacefully. In some countries, instead of having a marching band and peace in transition of power, you have violence and a lot of lives lost,” Bachus said. “We thank God we live in a democracy where we all make the decision who our president is by our individual votes.”

Bachus spoke about peaceful government, including the branches of federal government and governance of the Constitution. He said the U.S. Capitol was purposely constructed on a hill to symbolize this democracy, which is why terrorists attempted to attack the Capitol on Sept. 11, 2001.

Bachus pointed to his necktice, which he purchased from the Mumbai Taj Mahal Palace before its bombing in 2008. He said the palace was founded by Indian Jamsetji Tata as a place of non-discrimination after he was refused hotel accommodations in his own country.

Bachus spoke of the civil rights movement in Birmingham and how Ghandi’s philosophy of non-violent resistance, founded on biblical principles, influenced Dr. King. Celebrating the 50th civil rights anniversary marks our ability to settle differences of opinion in a peaceful way, Bachus said.

“I am very proud of their accomplishments over the past year, especially since they were chosen to go to Washington to represent our state at the inauguration,” Murrell said. “I’m extremely honored that Congressman Bachus came down to speak to the students about their trip and what a huge deal it was for them to be chosen.”

FROM STAFF REPORTS The Spain Park Lady Jaguars scored a run in the fourth to avoid the shutout in a... read more