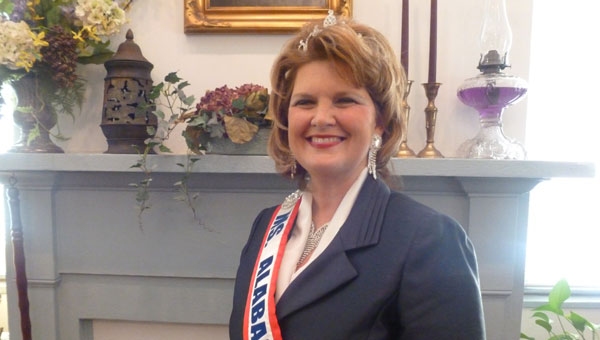 Niva Dorough of Westover is wife to husband Harry, mother to three sons, grandmother to seven grandchildren and vice president of American Sure Step Inc. in Pelham.

However, at 60, Dorough yearned to step out of her comfort zone and try something new. Her goal became Ms. Senior Shelby County.

The mission of this non-profit organization is to “enrich the lives of senior women while also allowing them to share their experiences, wisdom, and interests with others.” Women are judged on interview, philosophy of life, evening gown, and talent.

“Life is precious, and for me it’s important to stay focused, be positive and strive to make a difference every day,” said Dorough.

“Being crowned Ms. Senior Shelby County 2012 and Ms. Senior Alabama 2012, as well as competing in the National Ms. Senior America Pageant, has been a rewarding experience for me.

“It has given me the opportunity to evaluate my strengths, and weaknesses, my past accomplishments and my future dreams, meet so many wonderful friends locally and at the national level.

“It is a wonderful opportunity for women the age of elegance to showcase their talents, express their values and accomplish their dreams. It is a platform to encourage others to become involved in many valuable community activities, which in turn makes a difference in so many people’s lives.”

Former Ms. Senior Alabama Edwina Chappell is the director of the Ms. Senior Shelby County Pageant which is an open pageant, for all Alabama women age 60 and over.

The Ms. Senior Shelby County Pageant will be Saturday, April 6, at 2 p.m. at the Serve Pro facility on U.S. 280 East just past intersection Shelby County 55.

Isabella Powell with her parents, Charles and Katherine Powell, at the Saints Alive luncheon at the First Baptist Church of... read more