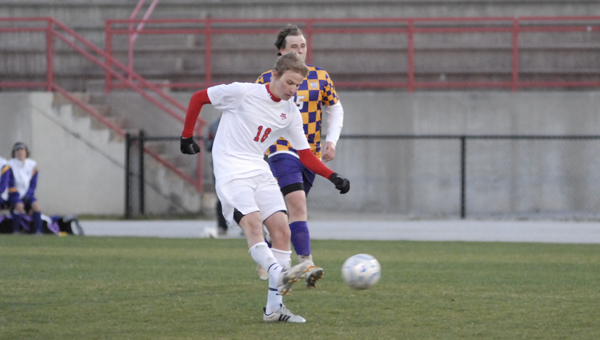 Thompson’s Jesse White sends the ball toward the net for the Warriors only goal in a 3-1 loss to Daphne March 25. (Reporter photo/Mickel Ponthieux)

ALABASTER – The Thompson Warriors responded in the second half after falling behind with a goal, but fell to the Daphne Trojans 3-1 at home March 25.

“Unfortunately in the first half we had a few go in,” said Thompson head coach Caroline Gluck. “In the second half we didn’t allow them to score and ended up returning one to make the score 3-1,”

The Warriors (6-7-1) fell behind when Daphne’s Kelton Bailey opened the scoring with a goal 20 minutes into the game to give the Trojans a 1-0 lead.

Daphne added to its lead with less than 14 minutes to play in the first half when Levi Ehemke found the back of the net for a 2-0 lead. The Trojans took a 3-0 lead at the half when the Warriors were unable to clear a Daphne attack and put the ball in their own goal.

Gluck made a formation change for the Warriors to start the second half and results quickly followed. Thompson’s Jesse White stole the ball from a Daphne defender and put the ball into the net from beyond the 18-yard mark to give the Warriors their only goal of the game.

“We came out in a different formation, so that helped,” said Gluck. “Our intensity level increased throughout the second half. “

The Warriors will return to area play on March 29 when they host Chelsea.