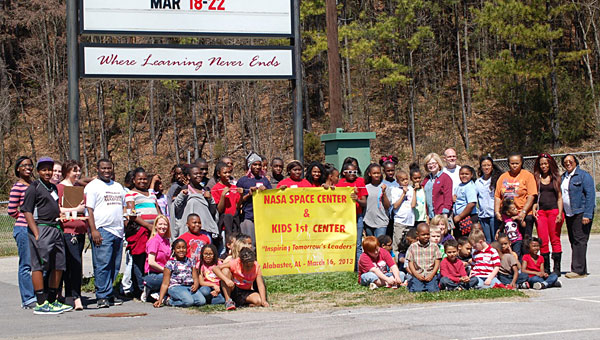 On March 16, visitors from NASA’s Marshall Space Flight Center in Huntsville spent the day visiting with Kids First members as they learned about space and completed several cosmic-themed projects.

“The theme of the day was inspiring tomorrow’s leaders, and I think the kids were definitely inspired,” said Kids First Executive Director Cindy Hawkins. “We had a great day.”

During the visit, the kids completed several activities such as building a lunar rover, solving simulated problems and working as a team, Hawkins said. The kids built and launched compressed air-powered rockets, and watched as NASA personnel shot off a small fuel-powered rocket.

The event was part of the NASA Beginning Engineering, Science and Technology program, which is designed to introduce kids to the engineering process through hands-on activities, Hawkins said.

“They really got into that stuff. They were very competitive,” Hawkins said of the kids. “It shows me that all you really have to do is give them a little bit of learning and they will take it and run with it.”

By NEAL WAGNER / City Editor Alabaster residents can now use their smartphones to find businesses in the city in... read more