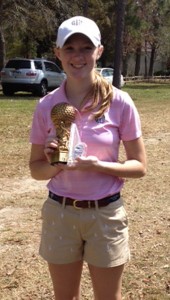 Gladden won the 15-19 Girls Division of the SJGT-Lakewood Junior Classic in Mobile’s 75-degree weather March 23-24. Grayson shot 77 on Saturday and 84 on Sunday for a total of 161. With the win, she earned exempt status into all Southeastern Junior Golf Tour Invitationals and an automatic bid into the end of year Tournament of Champions.

Grayson shot 80 at the Bob Jones Patriot Invitational tournament at The Ledges golf course in Huntsville March 25. The snow flurries and high winds were constant all day long and the wind chill was in the high 20’s. She hit 14 of 18 greens and made three birdies on her last nine holes.

“The conditions today were unbearable for most players, but not Grayson,” Pelham girls golf coach Scott Blair. “It was the kind of weather where nobody could feel their fingers or toes at the end of the day. To win her first high school tournament as a freshman in these conditions says everything you need to know about Grayson. She is the definition of a true competitor.”

FROM STAFF REPORTS The Vincent Yellow Jackets softball team was unable to recover from an 8-run deficit after two innings... read more