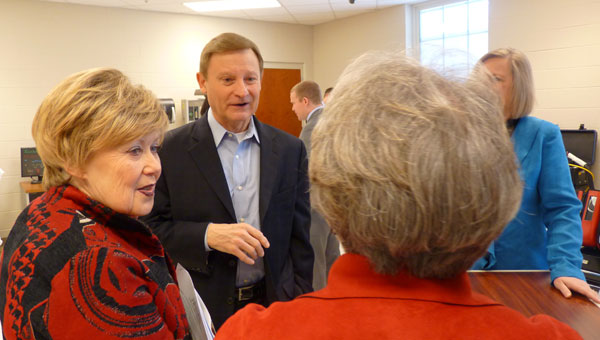 Bachus spoke to the Calera High School marching band on March 25 and was slated to speak at the Greater Shelby County Chamber of Commerce luncheon March 27 after visiting Jeff State.

Accompanied by Jeff State President Judy Merritt, Bachus took a short tour of the college, including some of its nursing facilities. Nursing and emergency medical services instructors showed off the METIman, an animatronic mannequin that allows nursing students to practice taking blood pressure, drawing blood, putting in catheters and other tasks.

An instructor can change the mannequin’s blood pressure or dilate its eyes, for example, to ensure students know what they’re doing.

After seeing the METIman, Bachus said he was impressed with the program and its ability to properly train nursing students, especially since he has personal experience with such training.

“There’s a lot of specialty training here,” he said, laughing. “I was that body once. When I was in the Army, I was in the medical corps, and we trained on each other. We were a whole lot cheaper.”

Bachus said he’s always supported the two-year college system in Alabama and believes, in a time of rising tuition costs at four-year universities, two-year colleges have a lot to offer.

“The American dream is a job. A job is really central to success, and education is essential,” he said. “I’ve talked to surgeons here in Birmingham who went to community college, and that’s how they got their start.”

FROM STAFF REPORTS The Pelham Panthers softball team avenged one of its two losses on the season in a 10-2... read more