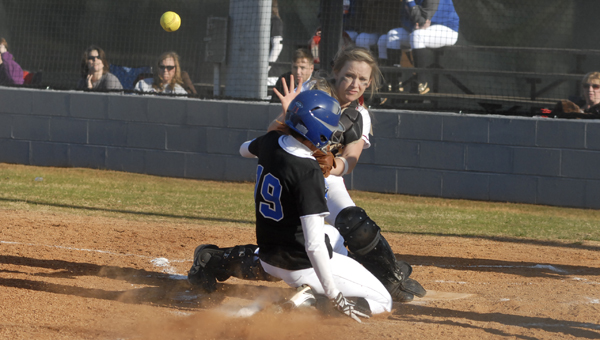 Montevallo’s Savannah Upton slides into home plate at the feet of Shelby County’s Jaselyn Harrison in the Lady Dogs 4-2 loss to the Ladycats March 27 at SCHS. (Reporter photo/Mickel Ponthieux)

COLUMBIANA – The Shelby County Ladycats took advantage of a Montevallo error in the fifth inning of a 4-2 victory over the Lady Dogs March 27.

Shelby County (10-0) found the offense after two and a half innings of no-hit softball by both teams. Karlee Cardwell led the bottom of the third with a walk and scored on a Brianna Buie double to right to give Shelby County a 1-0 lead. Brittany Lansford added to the advantage with a RBI single to right to plate Buie for a 2-0 score after three innings.

Shelby County’s Jessica Carden held a no-hitter through three innings until Montevallo’s Savannah Upton and Lacey Hamrick hit back-to-back singles to right. The Lady Dogs took advantage during the at-bat of Destiny Upton. Savannah Upton got caught in a rundown on a quick throw to third, but took home on a steal to give Montevallo its first run of the game.

Hamrick came home on a Destiny Upton sacrifice groundout to second to even the score 2-2 after four innings.

Shelby County answered in the bottom of the fifth inning to regain the lead. Buie led off with a hard hit to third and moved to second on a sacrifice bunt by Lanford. Kaitlyn Paschall followed with a hard hit to the second baseman and was able to beat out the throw, which also allowed Buie to score for a 3-2 Shelby County edge. Paschall later scored on a Montevallo error off a sacrifice bunt by Carden to give the Ladycats the 4-2 victory.

“We will take them anyway we can get them,” Shelby County head coach Ashley Phillips said on the runs scored in the fifth. “The team that makes the least mistakes usually wins and it just so happens they made one and we capitalized on it. We will take it, but we know we have to hit better.”

Carden picked up the win for Shelby County allowing two runs on three hits with six strikeouts and a walk.

Savannah Upton, Hamrick and Erin Draper each had a hit for Montevallo while Destiny Upton had the lone RBI.

FROM STAFF REPORTS The Spain Park Jaguars improved to 3-2 in pool play at the 2013 Baptist Health System Hoover... read more