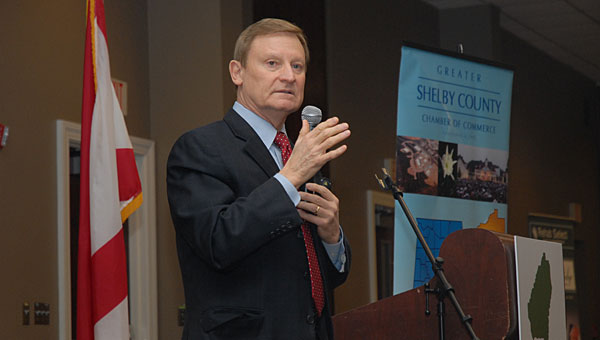 Bachus’ comments came during a Greater Shelby County Chamber of Commerce luncheon at the Civic Complex.

During the lunch, Bachus said the United States is “spending more money than we are bringing in,” and said growing government programs such as Medicare and Social Security are causing challenges with the nation’s budget.

The largest expenses in the country’s budget are Medicare at $814 billion, Social Security at $777 billion and defense spending at $665 billion.

“By far they are the two programs that, from a financial standpoint, are rapidly increasing,” Bachus said.

Bachus said America’s balance between retirees and young workers is skewed, and said the country’s birth rates are falling.

“We are not replacing our population, and a country that does not replace its population will stagnate,” Bachus said.

“With Social Security disability, we have a horrible status quo. It’s unacceptable and we’ve got to put our foot down,” Bachus said. “That’s your retirement money. If we don’t do something about this, they are going to say ‘Well, you may have to take a little less or work a little longer.’