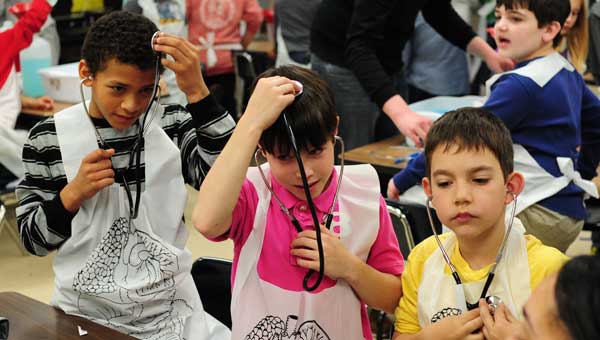 Riverchase Elementary third-graders learn about the proper, and improper, uses of a stethoscope during UAB’s PhUn week at the school on March 20. (Reporter Photo/Jon Goering)

“It’s not every day you have pig hearts in a classroom.”

Riverchase Elementary Assistant Principal Alice Turney makes a good point, but that’s exactly what happened when staff from the University of Alabama at Birmingham brought their Physiology Understanding (PhUn) program to the school March 18-20. 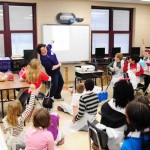 UAB’s Carmel McNicholas-Bevensee shows Riverchase Elementary 3rd-graders a powerpoint at the start of a session of PhUn week on March 20. (Reporter Photo/Jon Goering)

The program is an extension of PhUn Week, a nationwide event held each November to foster relationships between physiologists, teachers and students. With extra funding, UAB’s Department of Cell, Developmental and Integrative Biology is able to offer the program at numerous schools throughout the year.

“I saw this as a way to show children at a very early age that biomedical science can be fun and as a way to promote awareness that choices you make can have detrimental effects on their own normal physiology,” said Dr. Carmel McNicholas-Bevensee, a UAB instructor and director of UAB’s PhUn program. “As adults we take this concept for granted, but children do not make the connection. By bringing the science ‘to life’ with hands-on activities, it shows the children it can be more interesting than studying from a textbook.” 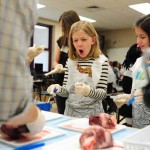 First, third and fifth grade students participated in the program over a three-day period. UAB’s PhUn program begins with an overview about the organ systems and scientists’ protective clothing. The program includes four main stations:

• A “lung-o-meter” station where students blow into a bottle filled with water and measure the distance of displaced water.

• A station where students listen to their own hearts with stethoscopes and learn about blood pressure.

• A station with anatomical models, which students disassemble to learn about each organ’s job.

• A station with pig hearts for the students to examine, which McNicholas-Bevensee said is typically the most popular activity. 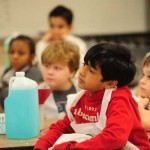 Turney said the program was well received by faculty, students and parents, many of whom also participated.

“We are fortunate to live so close to a university that has so much to offer and is willing to give to the community to better science and health education,” Turney said. “This is important to us at RES because we are an Alliance for a Healthier Generation School. Several years ago we won the bronze award and last fall we won the silver.”