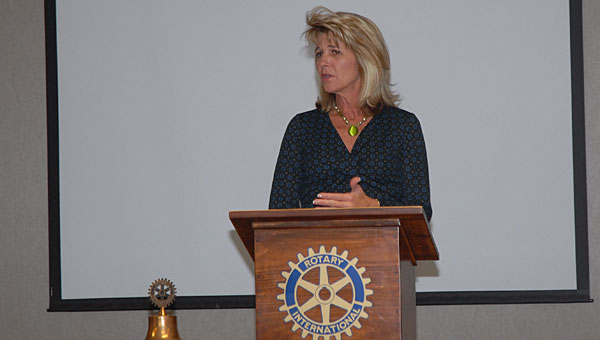 Developers are still working to attract retailers to the proposed Alabaster Exchange shopping center off U.S. 31, and are “optimistic” about the development’s future, Alabaster Mayor Marty Handlon said on March 28.

Handlon’s comments came during an Alabaster-Pelham Rotary Club lunch at Shelby Baptist Medical Center, during which she gave an update on the status of the city.

Handlon said Aronov is still actively recruiting businesses to the development, and said several entities have expressed interest in locating to the shopping center.

Handlon also said she has been pleased with the amount of growth the city has seen in its medical businesses, and said an oyster bar and meat-and-three restaurant is planning to open in the former Pavilion restaurant location off U.S. 31 near Shelby Baptist Medical Center.

During the lunch, Handlon also provided an update on the new Alabaster City Hall, which currently is under construction next to the Alabaster Senior Center.

Once completed, the new City Hall will house all city departments under one roof, and will facilitate city court and City Council meetings. New audio and video equipment will allow the city to record and broadcast its council meetings from the City Hall.

FROM STAFF REPORTS The Spain Park Jaguars fell to Hillcrest 9-5 in consolation bracket play at the 2013 Baptist Health... read more