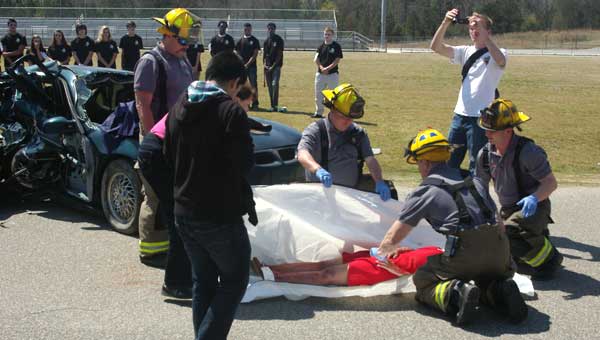 Emergency response personnel wrap a “victim” in a body bag during “Every Fifteen Minutes,” a simulation several Chelsea groups put on to illustrate the negative effects of drunk driving. (Photo by Linda Long.)

A soft breeze stirs on this Alabama spring day and brilliant blue skies provide an incongruous setting for the scene playing out at Chelsea High School. Two chunks of mangled metal, cars at one time, command center stage. Across the hood of one a girl lies motionless, just the hint of a red party dress peeking from under the tarpaulin which hides her blood-soaked body. Emergency rescue personnel hurry to help those still living.

“Control to Chelsea High School command. Lifesaver reports one minute out,” squawks a nearby walkie-talkie. Eyes turn to the sky seeking a glimpse of the helicopter on its mission to transport victims to the nearest trauma center. A coroner’s van waits to transport the dead.

Nearby, a mother watches anxiously as an ambulance, siren blaring and lights flashing, rushes her son to the nearest hospital. He will live but be paralyzed for his rest of his life.

Luckily this scene is only a simulation of what can happen when people drink and drive. Sadly, it is a too often repeated real life event, say organizers of the two-day drama called “Every Fifteen Minutes.” The title comes from a real life statistic; someone in the United States dies every fifteen minutes from an alcohol-related accident.

This emotionally charged simulation is designed to coincide with Chelsea Prom week coming up on April 6.

“Our students will get a first-hand experience this week of the importance of safe driving, said Cindy Warner public relations supervisor for Shelby County Schools in a press release. “It is designed to dramatically illustrate the potentially dangerous consequences of impaired and distracted driving.”

“It did its job,” said Juliett Ward, mother of the “paralyzed” student. “Whew. I’m almost speechless. Once I saw everything laid out. I just started crying. I hope the kids get it.”

“I’ll never forget this. I didn’t know they were going to be so tough with it, like leaving in a body bag and actually going to the hospital in a helicopter,” said Tiffani Stuart, a junior at Chelsa High. “That’s hard to watch. You just talked to them and now you’re seeing them dead. I really hope people will stop and think twice about drinking and driving after prom. They may think it’s really cool, but it’s not and it can have really bad consequences.”

In addition to the “accident” scene, the event included a mock trial for the drunk driver and a mock funeral for the accident victims. The entire event has been videotaped to be shown to students on Wednesday, April 3 prior to the prom on Friday night.

Student Jason Giles, dressed in a black shirt, white face paint and a coroner’s tag, had been one of several students tapped earlier in the day by the “Grim Reaper” to simulate the “living dead,”

“We represented people who had died in car crashes,” Giles said. “We were pulled from class and they read an obituary. Then, we had to walk around all day. We couldn’t talk or interact with anybody. We were just there, just dead. I hope this all has a huge effect on people. This is scary. This stuff really happens. Lives are never the same. I don’t want to be dead.”

Approximately 20 public service agencies and business were involved in this project. The Shelby County Sheriff’s Office and Chelsea Fire and Rescue coordinated the event.