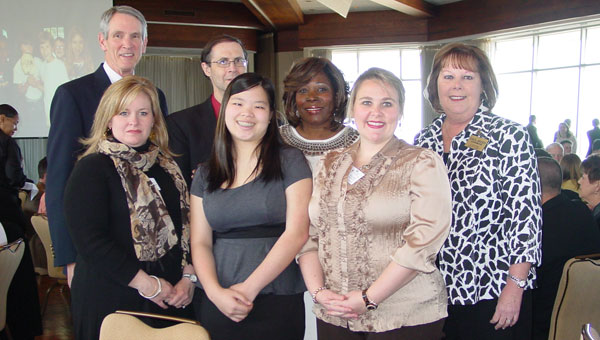 By CATHERINE LEGG / For the Reporter

A large group of Shelby County leaders attended the Boys & Girls Clubs of Central Alabama Youth of the Year Celebration Luncheon, on March 14 at The Club in Birmingham.

“This event gives us a chance to hear about the difference that the B&G Club makes in the lives of young people,” said Freda Shivers, director of the Montevallo unit. “Outstanding youth from each of the clubs in Jefferson, Shelby, St. Clair and Walker counties that make up the Clubs of Central Alabama share their stories about the impact the club has made for them.”

Nine candidates for the Youth of the Year award each made an impressive presentation.

Kristen Gardner, a high school senior from the Hueytown club, was named the Youth of the Year for Central Alabama, and she went on to win the state competition.

Xan Shivers of Montevallo, a counselor in training, was one of the candidates, and she talked about how she has been involved in the local club since its inception, and she has learned many valuable lessons.

She credited her counselors for teaching her passion, courage, calmness and confidence, and she said that the kids taught her patience, and how to look at things from their perspective.

“This year more than 40 people from Montevallo, and elsewhere in Shelby County, came to hear these stories and to begin to consider ways that we can expand club membership to include older youth in our community,” Freda Shivers said. “While we are pleased with our current program which serves members ages 6 to 12, the potential impact we could make on the community would be even greater if we had space to serve teenage youth.”