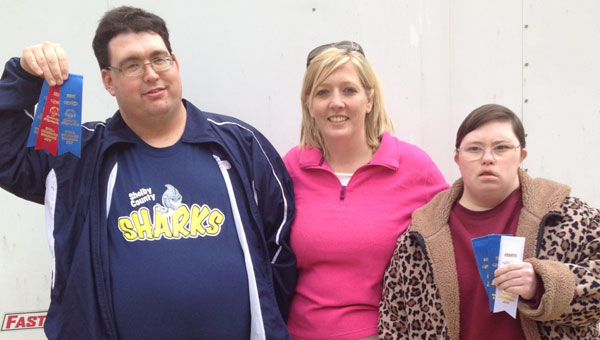 “I started swimming with Special Olympics when I was in eighth grade,” said Terry Christian.

Brandy Nivens began when she was around 10.

Both have since won many swimming awards with the program.

At their most recent meet in Opelika on March 23, Terry placed first in freestyle, second in backstroke and first in relay. Brandy also had first place wins in relay and in breast stroke.

“A lot of the athletes that swim have been swimming together since the beginning,” Terry said. “We are all good friends. Now there are two groups of swimmers because there are so many that want to be on the swim team.”

The swimmers practice one day a week at the YMCA in Pelham, Brandy said. Her mother, Donna, said time in the pool is donated by the Y.

Sponsor for the team is the Alabama Power Service Organization at Gaston in Wilsonville, she said. Head Coach is Valinda Pate, Adaptive P.E. Teacher for Shelby County.

Terry said other than swimming practice at the Y, he works out at the Rock Fitness Center with Zac Marbury.

“He (Zac) is working with me to help me build upper body strength that will help me in swimming,” he said.

“I have always liked to swim. I was swimming before I started to school.”

Terry also likes Alabama football, Atlanta Braves and NASCAR. He is an amateur radio (HAM) operator and a storm spotter for the National Weather Service, he said, and he likes to help Santa out by doing appearances around Chelsea. He works part-time as a bagger at Winn-Dixie in Chelsea.

Brandy said she likes to spend time at the computer. She plays movies and programs and loves hidden object games. She buys games, CDs, and teen fan magazines with money she earns working part-time at Taziki’s restaurant in Inverness. She enjoys making scrapbooks of stars with pictures she cuts from magazines.

Their next swim meet will be at Jasper in April. State competition is in May at Troy.

CHS Fishing club members vying for Club of the Year