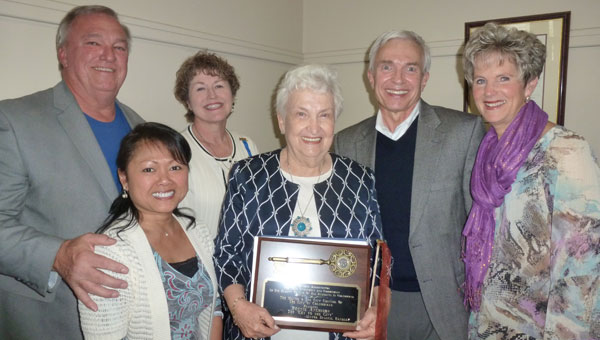 Bonnie Ruth Loftis Mason Atchison is one of Columbiana, Alabama most valued treasures. Atchison was in complete shock when she entered the Columbiana Public Library with friend Peggy Wood to attend their monthly DAR meeting and instead was greeted by family and friends screaming SURPRISE!

Atchison’s son Mike Mason and wife Judy came from Birmingham along with Judy’s parents Lucille and Bud Johnson. Members of the Novella Club of Columbiana of which Atchison is a member attended the reception along with members of the Harrison Library Board, Mayor Stancil and Ann Handley, Police Chief Lamar Vick, City Clerk Gina Antolini, Marketing Director Helen Dean, David Lindsay Chapter members and many Atchison’s friends.

The special presentation began when Regent Margaret Clark awarded Atchison with the DAR Women in American History Award for her years of service as educator, civic leader and curator of the Karl C. Harrison Museum of George Washington. Then Mayor Handley presented Atchison with a key to the City of Columbiana and read the proclamation which ended with:

“Now, Therefore, I, Stancil Handley, by virtue of the authority vested in my as Mayor of the City of Columbiana do hereby Proclaim April 3, 2013 as Bonnie Atchison Day in the City of Columbiana, Alabama. Furthermore, this proclamation is made on the occasion of the recognition of her contribution to the community of Columbiana by the Daughters of the American Revolution (DAR), recognizing her outstanding leadership, commitment and service, having given so selflessly of her time and energies to create a better community and to contribute to the lives of so many.”

By NEAL WAGNER / City Editor The Vestavia Hills Police Department is looking for a man with Alabaster ties who... read more