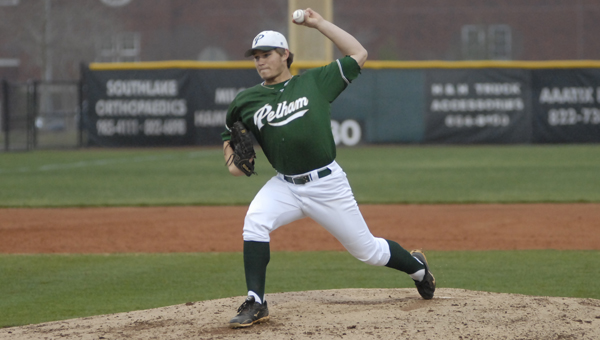 “I feel like we have really come together the last few weeks,” Pelham head coach Sean Anderson said. “The kids are having a good time playing, and that’s what it’s about.”

Spain Park (15-14, 1-3) scored first when Josh Rich roped a 2-out single to centerfield to score Josh Close for a 1-0 Jaguar lead after the first inning.

Pelham answered in the top of the second when Fletcher Johnson hit a double to left to give the Panthers a 2-1 lead.

The score stood until the fourth when Pelham took advantage of a bases loaded situation with just one out. Hunter Stovall hit a sacrifice fly to score Austin Moore, and Thomas Lowery put the ball in play up the middle on a tough play for the Jaguars. Lowery reached on a Spain Park error, which allowed two Panthers to score for a 5-1 score after four innings.

Pelham’s Jack Pierce battled the Spain Park lineup and held the Jaguars to one run on four hits with five strikeouts and three walks in the win.

“Jack struggled a little bit, but when you hold Spain Park to one run and you don’t have your best stuff, you pretty much went out there and battled,” said Anderson. “He have us the opportunity to win inning after inning he went out there.”

Sam Finnerty pitched two innings for the save and allowed one hit with two strikeouts.

Rich took the loss for Spain Park allowing three earned runs on six hits with a strikeout and five walks.

Johnson finished the game batting 1-for-3 with a double and two RBIs. Zach King went 2-for-3 and Lowery added a 2-for-4 effort for Pelham.

Rich led Spain Park batting 1-for-1 with a RBI. Grant Veteto went 1-for-4 with a double for the Jaguars.