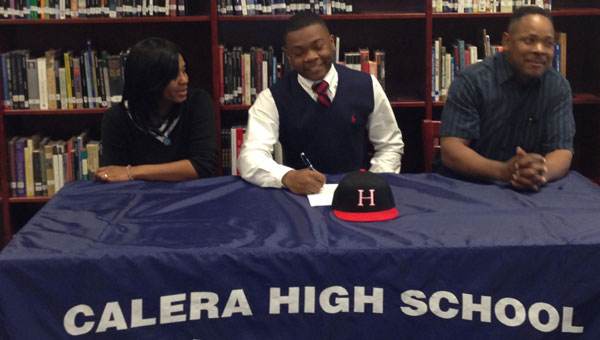 “I played for the Calera Rookie League Pirates my first year. Jeff Stuart and my dad coached the team,” Seay said. “I’ve played every year since then.”

Seay has played several sports, but baseball is his favorite.

He’s played varsity since eighth grade as a third baseman, but this year he’s playing center and short.

He began participating in showcases and events at age 15 and took batting lessons from White Sox pro Norm Martel.

“My parents have definitely spent a lot of time helping me get where I want to go,” Seay said. “I’ve worked out for coaches in Arizona, Tennessee, Georgia, Texas and Mississippi. In Arizona I played in the Under Armour Pre-Season All American Tournament.”

“JR is one of the best young men I’ve had an opportunity to coach,” Floyd said. “I’ve watched him mature as a player since seventh grade and I’m very happy for him to have this opportunity to continue his career at the next level. I look forward to keeping up with him through the coming years.”

Gandy said Seay is one of the best all-around players he’s had the privilege to coach. “JR represents everything a coach looks for in a leader, player, student and as a young man. His dedication to the baseball program has been astronomical. With his work ethic and the support of two great parents, I have no doubt he will succeed in whatever life brings forth. His presence will be greatly missed by the Calera baseball program and myself.”

Marilon and Bill Seay are extremely proud of their son. “We’re just grateful and thankful to the Lord that JR is doing things that he wants to do,” Marilon said. “We support him in whatever he wants to do and this seems to be it. Tampa is a good place to go, we plan to visit him a lot.”

Thanks to Habitat for Humanity, Tilwana Conwell is a homeowner in the Shiloh Creek subdivision. Pictured with her are sons... read more