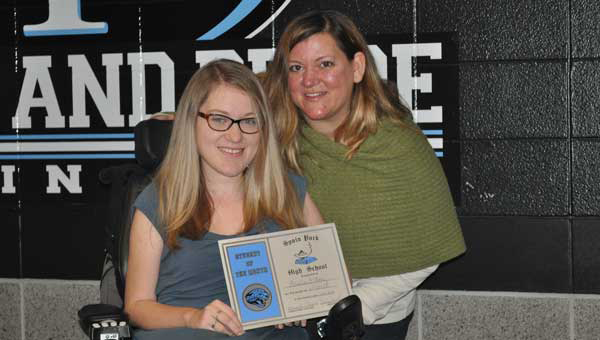 By LINDA LONG/ For the Reporter

Don’t call Catherine O’Hare heroic. She will have no part of it.

“I’m just a mother,” she said, “doing what any other mother would do for their child.”

People who know her don’t agree, especially her 18-year-old daughter Amelia, who nominated her mom for the Shire BRAVE Award, presented by an international company that honors nonprofessional caregivers for their courage and devotion.

In Amelia’s nominating letter she wrote, “I use a powered wheelchair to get around because I cannot walk or stand. I need help with all practical daily living skills that most people take for granted. My mom has always been my caregiver; she sacrifices her sleep every night, more than once to help me roll. She has taught me that I can be anything and do anything. She has showed me how to advocate for myself. My mom has fought for me, whether to get the chance to go on school trips or to ride the bus with my friends. She has always found a way to give me as many opportunities as possible. She is the one who lifts me in and out of the car. We don’t have a special car with a lift, so she has to push it up into the back of the car. She is my personal bather, wardrobe consultant, hair stylist, social coordinator, personal chef.”

The letter worked its magic as Shire, which develops pharmaceuticals, genetic therapies and regenerative medicine to treat people with life-altering conditions, named Catherine one of 15 exceptional caregivers worldwide for her devotion and selflessness in the care of her daughter.

Amelia was only 2 when her parents got the devastating news; their baby suffered from a rare genetic neuromuscular disease called SMA (Spinal Muscular Atrophy). There are no treatments or cure for this chronic, often life threatening condition.

“She was walking and talking like any other 2-year-old, but a mother’s instinct told me something was wrong,” Catherine said. “After visiting several doctors we got the news. We had never heard of this disease and were devastated at the diagnosis.”

After going through different stages of grief, Catherine said she and her husband Peter, who live in Inverness, were forced to come to terms with reality.

“We weren’t sure of anything,” she recalled. “How would the disease progress? How would living with Amelia’s future disability define our family? But I was sure of one thing; that no matter what, it would become my life’s mission to ensure that Amelia would have as normal of a life as possible and not be limited or defined by a disability.”

That vow was soon replaced by an even more challenging commitment. “We decided that normal was boring and changed the mission to an enriched, meaningful life, full of love and laughter, friends and the pursuit of happiness,” she said.

Catherine and Peter have spent the last 16 years fulfilling that mission. As parents of two other children aged 6 and 9, their aim to help Amelia reach her goals hasn’t always been easy, but the family remains steadfast. Amelia is engaged in as many activities as any other teenager, although the degenerative nature of Amelia’s disease often makes adapting her activities to her functional ability a necessity.

“She danced at Children’s Dance Foundation until walking became too difficult to manage,” Catherine said. “We replaced this activity with drama.”

Amelia is still involved in theatre today. She performs and competes with Spain Park High School Theatre and is currently serving as the co-stage manager for the school’s spring production of Robin Hood.”

Amelia’s other activities read like a list from Who’s Who. She’s gone to arts camps and ridden horses with Special Equestrians. She’s active in swimming and wheelchair sports with Lakeshore Foundation, where she is currently a member and a mentoring coach for the junior swim team. She also volunteers her summers with the McWane Center and the Birmingham Zoo, where she’s a Zoofari Teen. Over the years she’s been involved with Muscular Dystrophy Association of Alabama, even serving as the goodwill ambassador.

The list goes on and on for this overachieving teen and the proud mother who helped make it all possible.

However, Catherine is quick to assert she “is not a super hero” and is doing what any parent would do.

“It is tough. We get tired. It is easy to get overwhelmed about the future,” she said. “When I find myself obsessing, I find that my faith and the power of prayer help keep me grounded. I am also reminded at these times to focus on life one day at a time.”

“I remember worrying when she was 5,” she continued, “how in the world would I lift her when she was 10? And now, she is turning 19 next week and I am worrying about how to get her to the prom with her friends as independently as possible. This is a normal teenage experience she has not yet experienced, riding in a car with your friends. Then there is college and beyond…I haven’t figured it out it, but I will.”

Helena ranked the highest out of Shelby County cities included on a recent list of business-friendly cities in Alabama. (File)... read more