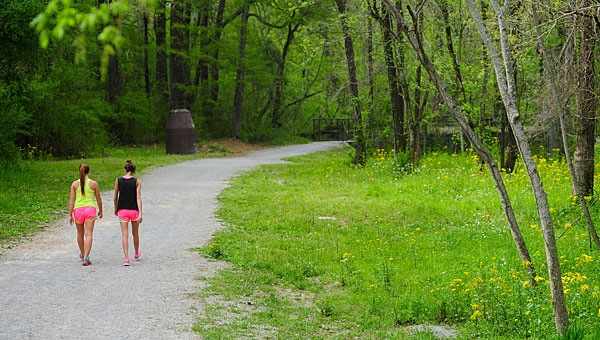 Alabaster’s Buck Creek Trail could be extended to the city’s new YMCA building and Thompson High School after a proposed bridge replacement project on Thompson Road is completed.

Shelby County Manager Alex Dudchock made the announcement during the April 5 dedication ceremony for the new Alabaster YMCA building off Plaza Circle. Dudchock said Alabaster and Shelby County plan to partner on the project, which would extend the Buck Creek walking trail from its current south terminus near the Alabaster Parks and Recreation depot building southward to the YMCA and THS.

“(The) city is interested and willing to be a partner,” Alabaster City Manager George Henry wrote in an email.

The Buck Creek Trail currently extends one mile from Buck Creek Park on Sixth Avenue Southwest to the depot building.

Dudchock said the trail extension will be possible after the current Thompson Road bridge over Buck Creek is replaced. The Thompson Road project was included on a recently released list of projects approved through the Alabama Transportation Rehabilitation and Improvement Program.

According to the ATRIP list, the Thompson Road project is estimated to cost about $2.5 million, of which $2 million will be covered by ATRIP funds.

Alabaster and Shelby County currently are working to finalize an agreement to fund the $500,000 in matching funds, Henry said.

Once the Thompson Road bridge is replaced, it will allow enough room to run the Buck Creek Trail under Thompson Road and on to the YMCA building and THS, Dudchock said.