The currently vacant former Moore Handley property on U.S. 31 in Pelham could get new life as a distribution center and showroom for the Summer Classics furniture company flanked by retail and other outparcel developments, according to Pelham Mayor Gary Waters.

On April 8, the city received architectural renderings displaying the potential layout of the proposed project, which would be a partnership between the city of Pelham, Shelby County and the Shelby County Industrial Development Authority.

“The architects just brought us a new rendering, and I am very excited about that,” Waters said during an April 11 Alabaster-Pelham Rotary Club lunch. “I think all of us need to think regionally on this project. The creative relationship between the Industrial Development Board, Pelham and Shelby County is solid.” 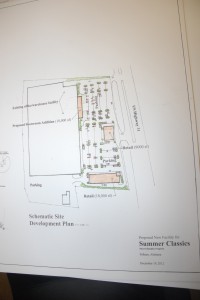 The architectural rendering of the proposed development of the former Moore Handley property in Pelham. (Contributed)

The former Moore Handley property occupies about 30 acres in Pelham’s high-traffic U.S. 31 corridor, and has been vacant since Moore Handley went out of business several years ago.

Pelham’s previous mayor and City Council members said they would like to work with Shelby County and the Shelby County Industrial Development Authority to purchase the vacant property and then sell a portion of it to the Summer Classics furniture company. In 2012, the previous City Council voted to authorize former Mayor Don Murphy to negotiate the city’s purchase of the property, but the city did not finalize the purchase before the end of Murphy’s term in November 2012.

Waters said he and the City Council continued to work on a possible agreement to develop the property after they took office.

“I think we are on the verge of brokering something very clever and marvelous,” Waters said of the mixed-use project.

The Pelham City Council and the Shelby County Commission still must vote on the proposed project before it can move forward. City Council President Rick Hayes previously said the council could discuss the matter as soon as its April 22 meeting.