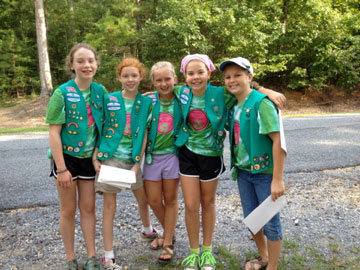 Leading their service unit weekend at Kanawahala Program Center in Chelsea, they helped seven other troops in the Coosa Valley Service Area earn their Forever Green Patch by teaching them how to recycle.
All activities took place outside without electricity, “in recognition of Earth Hour,” said scout leader Joy Lovette.
As part of the project, they showed how to make “Bee Green,” pins, which they call “SWAPS,” or “Special Whatchamacallits Affectionately Pinned Somewhere” pins, she said.
They set up a “recycled creations” station, using materials such as construction paper, fabric scraps, toilet paper rolls, and yarn to make crafts.
“It was fun to incorporate recycling into making fun crafts that we could use forever,” 11-year-old Shelby Lovette said. “We had stations set up where we taught things about recycling.”
They helped troops make posters for a contest encouraging people to use reusable water bottles, led in making water bottle tags to keep track of how many times reusable water bottles are used, and created and led a relay and bottle tag game to help teach recycling.
Joy said they coordinated activities and made signs for stations with Troop 764, lead by Mandie Gonzalez.
“I helped give them some direction,” she said. “But the girls understood this was their Bronze Award project, and their job to lead the others. They did all of the work themselves.”
The girls came up with ideas, prepared the materials, and on the day of the event they led the flag ceremony and singing, and gave directions for rotating through the stations.
“They took charge and made a difference. I am so proud of my girls,” she said.
The group enjoyed lunch catered by Food Studio B, and went swimming and kayaking. The Bronze Award is the highest award a Girl Scout Junior can earn.