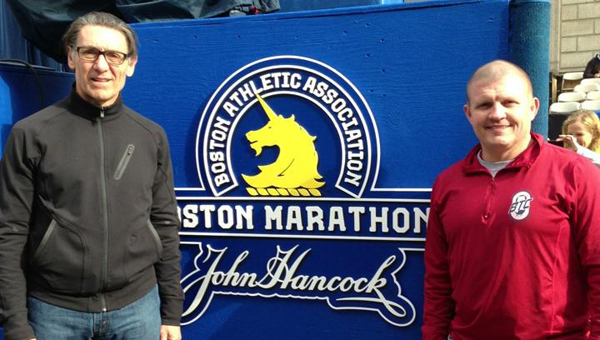 Chelsea resident Randy Lyle (right) and friend Jack Burnette of Vestavia pose for a picture at the finish line of the Boston Marathon on April 14, a day before the race. (Contributed)

Shelby County residents are able to tell their experiences after two bombs exploded at the finish line of the Boston Marathon April 15.

A group of six county residents with the Birmingham Track Club traveled to Boston to run in the marathon or cheer on their favorite runner.

Chelsea resident and Birmingham Track Club treasurer Randy Lyle said that he was a half-mile from the finish line before race officials stopped all the runners.

“Nobody for at least several minutes knew anything about what was going on and why we were stopped,” Lyle said. “After about 10 minutes or so, I came to the conclusion that it wasn’t a normal stoppage.”

Lyle proceeded to call his wife and found out about the explosions.

It took between two to three hours for Lyle to get back to his hotel after the stoppage on the course.

Lyle said that he was disappointed he was unable to finish his first Boston Marathon, but knows that he was fortunate not to be in the face of danger.

“The thought of crossing that finish line in all of the marathons in the world – I was looking forward to it,” said Lyle. “Knowing that people were hurt and killed, that’s sort of insignificant at this point.”

According to reports, three people were killed and more than 140 people were injured in the blasts.

The Shelby County Reporter was able to confirm the safety of four others at the race. Jeff Perry of Harpersville and friend Heath Reynolds of Vincent reported via Facebook status that they were safe in their hotel in Boston the afternoon of the explosions. Emily Waite of Greystone was also a member of the club running in the race and was confirmed safe by Birmingham Track Club President Jennifer Andress. Sally Evenden of Montevallo finished the race 15 minutes before the explosions and is safe accoring to husband Dr. Daniel Valentine.