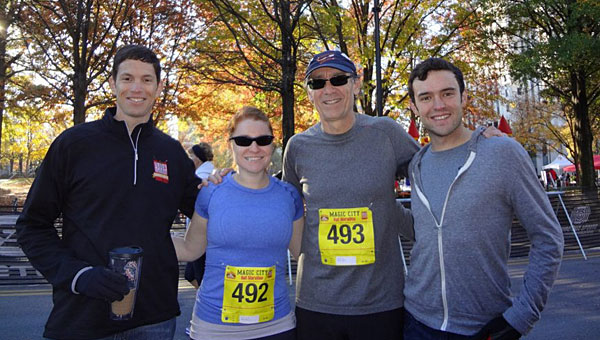 Pelham native Daniel McBrayer, right, competed in the Boston Marathon, and was about two blocks away when explosions went off near the race’s finish line. (Contributed)

Pelham native and Assistant Shelby County District Attorney Daniel McBrayer, 27, called the scene “surreal,” but said he was not near a pair of explosions when they went off at the Boston Marathon on April 15.

According to national media reports, two explosions rocked the area near the marathon’s finish line on the afternoon of April 15, killing at least two people and injuring more than 20 more. According to reports, a third explosion also went off near Boston’s John F. Kennedy Library.

McBrayer, a 2003 Pelham High School graduate who now lives in Birmingham, traveled with several other Birmingham-area runners to compete in the marathon, and said he crossed the finish line about an hour before the explosions went off.

“I was at the hotel when it happened,” McBrayer said at about 4 p.m., noting his hotel was about two blocks away from the explosions. “The explosions went off at about four hours and nine minutes in, so it was about an hour after I finished.”

McBrayer said he and the other Birmingham-area contestants likely ran by the explosive devices unaware. One of his friends was a spectator at the race, and was standing near the site of one of the explosions for most of the race before he traveled back to his hotel before the blasts went off.

This was McBrayer’s first time to compete in the Boston Marathon, and he said the atmosphere was “surreal” in the city after the explosions went off.

“It was a great marathon,” McBrayer said. “I’m very excited to be here. I just hate that it had to be marred by something awful like this.”

McBrayer arrived in Boston on April 13, and was planning to sightsee with friends on April 16 before returning to Birmingham on April 17.

“I’m not sure how much sightseeing we will be able to do with the city on lockdown,” McBrayer said. “We will just play it by ear.”

Chelsea resident Randy Lyle (right) and friend Jack Burnette of Vestavia pose for a picture at the finish line of... read more