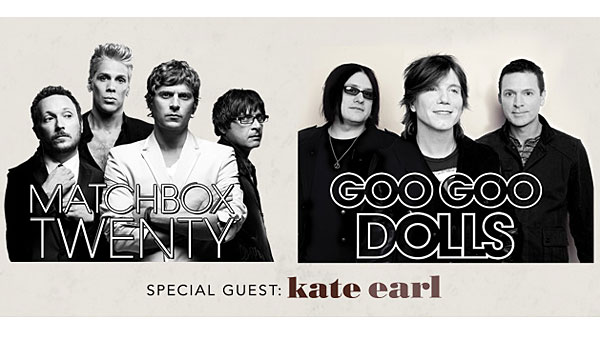 A pair of popular alternative rock bands will hit the stage at Pelham’s Oak Mountain Amphitheatre in early August, the venue announced recently.

Tickets for the concert went on sale on Friday, April 12, and start at $45. Tickets are available on Livenation.com.

Matchbox Twenty formed in 1995, and is best known for songs such as “3 a.m.,” “Real World” and “Unwell.” The band consists of Rob Thomas on lead vocals and rhythm guitar, Brian Yale on backup vocals and bass guitar, Paul Doucette on percussion and backup vocals and Kyle Cook on lead guitar.

Goo Goo Dolls originally formed in 1986, and are known for popular songs such as “Iris,” “Name” and “Slide.” The band consists of John Rzeznik on lead vocals and lead guitar, Robby Takac on bass guitar and vocals and Mike Malinin on percussion.

The concert is the most recent event announced for the Amphitheatre’s 2013 schedule, which also includes an April 27 performance by Alan Jackson, a May 2 concert by Tim McGraw, a July 9 performance by Lil Wayne, July 19-20 performances by Widespread Panic and an Aug. 22 concert by Keith Urban.

FROM STAFF REPORTS MONTEVALLO – The University of Montevallo baseball team is ranked No. 6 in the latest D2BaseballNews.com NCAA Division... read more