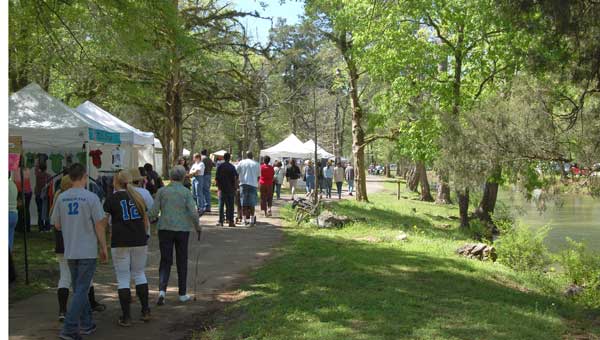 The Montevallo Arts Council hosted its seventh annual Montevallo Art Show on April 13. More than 70 vendors lined the walking path around Shoal Creek in Orr Park in hopes of introducing and selling their art to the 2,000 patrons in attendance.

Event organizer and Arts Council President Suzanne Hurst said that while the event lasts only a day, it takes the entire calendar to create.

“We work on it practically all year,” she said. “We’ll pick a date [for next year] within the next two weeks.”

Hurst also said the event keeps growing each year, and the Council has plans for expanding the event in the future.

“Every year we’d like to have more artists,” she said. “We do have some area to expand near the stage.”

“I think we’ve been able to grow it each year,” he said. “You plan, set up, stage and once it gets going, the event takes on a personality of its own. We’re always looking to make it bigger.”

Birmingham artist Anthony Tavis said the show had a special meaning for him, not only as a vendor, but as a connoisseur of art as well.

“Montevallo’s art festival was probably the first art festival I went to,” he said. “I really enjoyed it, and years later I started making art and applied to it, and here I am.”

He also said the atmosphere of the event was one of the things that kept him coming back.

Tavis wasn’t the only one who said the atmosphere led to his appearance. Jennifer Whatley of Helena brought her children to the event to get out and take in local art.

“A friend of mine told me about the event on Facebook,” she said. “I like to take the kids to art stuff; my husband’s an artist.”

For more information on the Montevallo Arts Council, visit montevalloartscouncil.org.