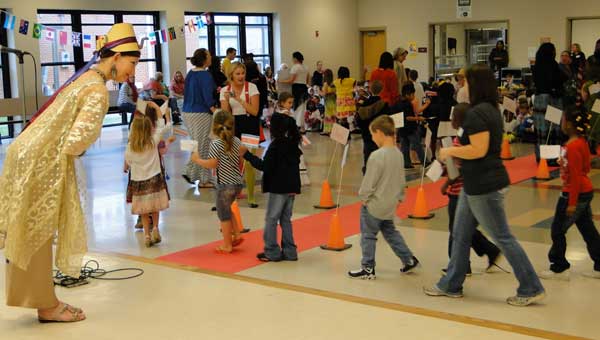 By MOLLIE BROWN/For the Reporter

CALERA – Calera Elementary students proudly waved international flags in the opening ceremony of the school’s first multicultural fair held April 5. Twenty countries were represented by students, parents and school administration, many of whom dressed in native costume of the adopted lands.

Dressed as Egyptian Queen Nefertiti, professional educator and dancer Deborah Maulden opened the ceremony and greeted the audience with “hello” spoken in several languages, and the children enthusiastically responded. Maulden said the event promoted awareness and diversity of cultures.

“I’ve worked with the students for three weeks researching the food, music, art, dance and culture of the countries represented today,” she said. “This program is not only educational, but it’s completely inter-curricular. History, science, math, geography have all been used throughout our study.”

Classrooms teamed together to decorate the hallways and classrooms in countries such as Greece, Germany, Mexico, China, Nigeria, Egypt and Italy. Mrs. Janney’s kindergarten classroom was transformed into the land of Kenya with help from parents Mary and Willy Waithaka, who are originallyf rom Kenya. Girls visiting India had unique henna hand art applied by student Agna Patel’s relatives.

“We did a flag, the capital of Russia is Moscow and they are famous for ballet,” she said. “My favorite part of the day was when Kennedy scared me cause I wasn’t looking. My favorite room was the one that had yummy food. I don’t remember what it was called, but it was kinda orange color and it tasted yummy.”

Teachers Holly Soto and Jacquelyn Holladay organized the fair. Soto said the diversity of the Calera community was the inspiration.

“This community has many different cultures and we wanted the children to be aware of it,” she said. “We wrote a grant, but I guess we asked too much because we didn’t get it. We were determined to do it and it took lots of hard work, sweat and tears to get here.”

Principal Celita Deem said the concerted effort made the day a success.

“We welcome our parents and media to help us celebrate,” she said. “Our students and teachers have worked very hard to make the fair successful. We plan to make it an annual event.”

Alabaster will use savings from a recent bond refinancing to perform upgrades on the city’s sewer treatment plant off U.S.... read more