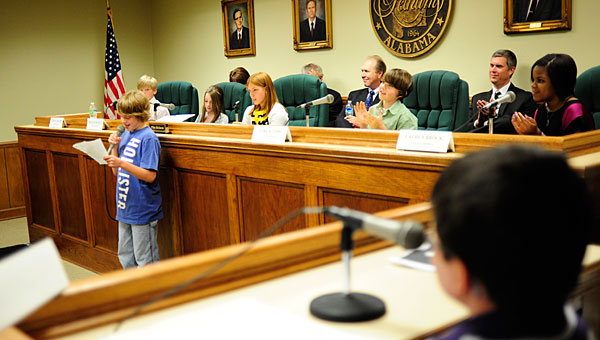 After the adult council members hold their brief meeting to take care of city business, they will step down to welcome a much younger group of leaders to the stand as part of the annual Youth Government Day.

Valley Intermediate fifth-graders recently held a mock election to name a mayor, five City Council members, a Chamber of Commerce president and city department heads from among their peers. Before the April 22 meeting, the kids will spend half of the day with their adult counterparts as they get firsthand knowledge on the workings of Pelham’s government.

After taking the stand during the meeting at City Hall, each of the students elected to fill a city position will give a report on what they learned during the day.

In past years, the student-elected City Council has passed resolutions supporting VIS, anti-bullying programs and more.

Before the council meeting, about 275 VIS fifth-graders and their teachers will visit Pelham City Hall to learn about the city’s government workings. During the visits, the students will tour Pelham’s administration offices, library, Revenue Department, court, police and fire departments and public works.

“A part of the fifth-grade school curriculum, Youth Government Day has become an exciting learning experience for the students,” read a city press release.

The City Council meeting will begin at 7 p.m. at Pelham City Hall off U.S. 31.

By AMY JONES / Associate Editor On April 15, when we first heard reports that two explosions had gone off... read more