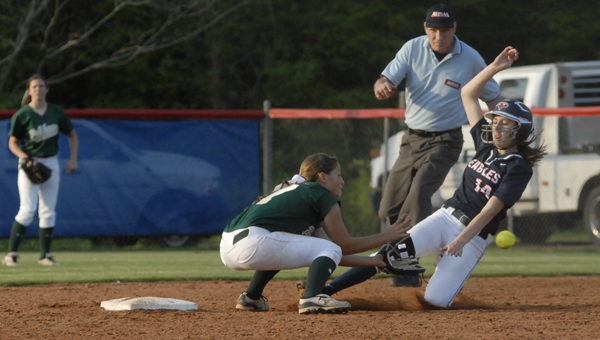 NORTH SHELBY – The Pelham Panthers softball team scored two insurance runs in the final inning to claim a 5-2 Class 6A, Area 8 victory over the Oak Mountain Eagles April 16 at OMHS.

The game featured two of the Alabama Sports Writers Association’s top-5 in the state with Pelham ranked No. 1 and Oak Mountain at No. 4.

The Panthers (30-3) jumped out to a 3-0 lead in the first inning while taking advantage of five singles.

The Pelham lead stood after both teams were held scoreless for the next four innings until the Eagles cut the deficit in the sixth. Camryn Greenwood led off the inning by drawing a walk and Madeline Parter followed with a double to deep center to score Oak Mountain’s first run for a 3-1 Pelham lead.

Caroline Seitz added a RBI double to left to bring the Eagles within one run, 3-2 after six innings of play.

The Panthers responded with a pair of insurance runs in the top of the seventh. Kristian Foster hit a double off the left field fence to begin the inning for Pelham. Caitlyn Sapp provided the power by sending the ball over the left field fence for a 2-run home run to seal the 5-2 victory.

FROM STAFF REPORTS The Pelham Panthers ended the season the way it began with a win over defending Class 6A... read more