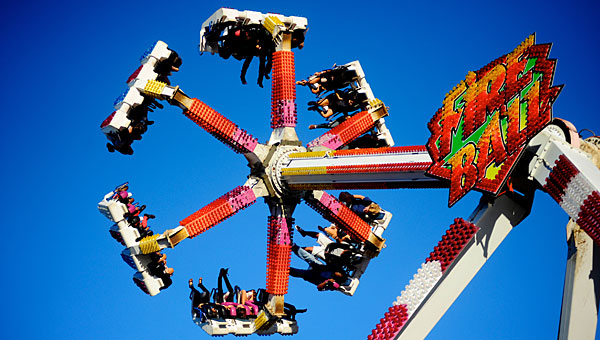 The Alabama State Fair will return to the grounds of the Oak Mountain Amphitheatre from April 19-28. (File)

Employees at the Oak Mountain Amphitheatre are preparing to host the largest Oak Mountain State Fair ever held at the venue from April 19-28.

“It’s going to be huge. We are hopping right now getting everything set up,” Amphitheatre General Manager Patrick Boone said on April 16.

Rides will include the large “century wheel” Ferris wheel, the “Blitzer” rollercoaster, the 55-foot “Banzai” swinging ride and several kids’ rides. Jimmy Riffle, star of the Animal Planet show “Gator Boys” will hold nightly shows from April 26-28 and the Neverless Nocks thrill performers and unicyclist Wade Henry will hold shows each night the fair is open.

The fair also will feature a variety of food, retail vendors and carnival games.

For a full list of performances and attractions, and to purchase tickets for the fair, visit Oakmountainstatefair.com.