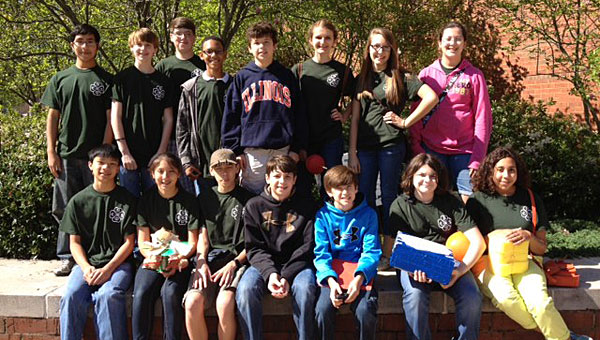 In mid-February, Adan and 14 of her RMS classmates read the rules for the University of Alabama-Birmingham’s annual Bent Newman Memorial Egg Drop Competition and started laying out their designs.

After each student came up with a design for their egg drop contraption, they submitted the designs to their peers to critique and improve, said RMS teacher Trish Bogdanchik, who sponsored the RMS team.

The students then turned their designs into reality and tested their effectiveness by dropping them off the RMS roof.

The purpose of the devices was to enable a raw egg to land safely and not break after a three-story drop off UAB’s business-engineering complex in downtown Birmingham.

Following input from her peers and testing at RMS, Adan created a cylinder-shaped egg holder with a spring base and six helicopter-type blades on top to slow the egg’s descent.

Before the UAB egg drop drop competition, judges evaluated the egg drop contraptions based on engineering, creativity, mass of the apparatus and the ease with which the egg was loaded into the contraption.

After all participants had tossed their contraptions off the top of the building – and after volunteers had cleaned broken eggs from the street and sidewalk – Adan’s design stood above all others.

“Jacqui won the middle school division and the overall competition. She beat everyone!” Bogdanchik wrote in an email, noting more than 300 participated in the competition. “We’re really proud of the kids!”