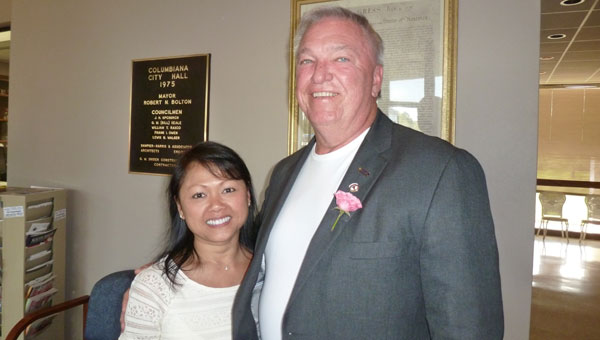 Mayor Stancil and Ann Handley at his first Coffee with the Mayor April 18. (Reporter photo/Phoebe Robinson)

By PHOEBE ROBINSON/For the Reporter

COLUMBIANA — City Hall was overflowing as Columbiana citizens, business, county and city leaders gathered to greet Mayor Stancil Handley and wife Ann for his first Coffee with the Mayor since his inauguration seven months ago.

Handley spoke to the group concerning his administration’s goals and his open door policy to be available to all, and made several announcements, including news about the former Summer Classics site and the community newsletter, which will hit the streets on May 1.

“My desire is for Columbiana to be all she can be,” said Handley. “I have been thrilled with the cooperation from all levels — from the governor’s office, to the county and city.”

Handley announced the Summer Classic’s “blighted” building has been gutted and is being renovated for an open-air amphitheater with usable space inside and playground outside to be available for events, reunions, etc. The new Shelby County Arts Center will be built on the adjacent land.

Handley said the first edition of the Columbiana Newsletter is on schedule for a May 1 debut and is being funded at no cost to the city or its citizens.

“Communication has been the Achilles heel of this city,” said Handley.”I hope that the newsletter will communicate to our citizens all the good things happening in our city.”

Handley also announced the new Senior Citizen Building on Mildred Street across from city hall has been gutted and the design and specs are being finalized with the architect’s drawing to be completed by the end of 2013. He thanked the county for its invaluable help with this project.

And last, Handley told the group of his desire to build a trail from Columbiana to the Shelby Irons Works. It is a dream of his with many details to be worked out, but definitely a work in progress. Handley’s desire is for Columbiana to be a destination city with the Shelby County Museum, George Washington Museum, Shelby County Arts Council Arts Center, new pavilion, trail and events to draw people to the city.

FROM STAFF REPORTS INVERNESS — The Hoover Police Department is searching for a man and woman suspected of robbing a... read more