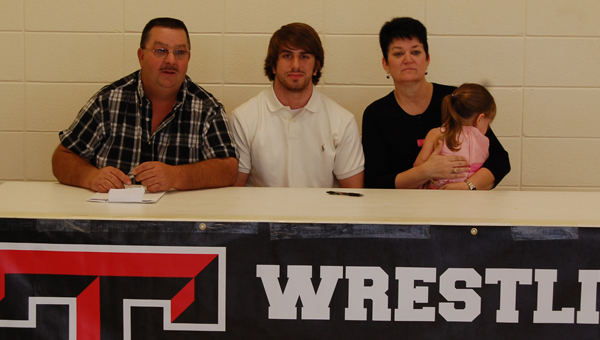 Thompson senior Nick Hall became the first Warrior wrestler to sign a Division I scholarship when he signed with Appalachian State April 18. Picutred with Hall are his parents Danny and Teresa Hall and his niece Kaitlyn Venable. (Reporter photo/Mickel Ponthieux)

ALABASTER – Thompson High School senior Nick Hall finished his high school career as the most decorated wrestler in the six-year history of the Warriors’ wrestling program. Hall’s achievements on the mat in high school provided him the opportunity to sign a Division I scholarship to wrestle for Appalachian State April 18.

“That’s pretty huge for our program,” said Thompson head coach Shawn Weltzin. “He has been a part of it since we started the high school program. He’s been a member of three state championship teams and a contributing member since the seventh grade.”

Hall is the only wrestler to qualify for the state tournament for six years, and has won three individual state titles with a four-year high school record of 192-15.

“He’s one of those stable figures in the program’s history,” Welzin said. “He’s always been there and we have been able to rely on him to score big points for us.”

Hall said that finally signing his scholarship with Appalachian State was “a huge relief” after verbally committing to the Mountaineers in December. Hall made several visits, including one at Hofstra, but ultimately chose Appalachian State who was his favorite from the beginning.

“I really like the coaches and the staff at first, so I was already leaning toward (Appalachian State),” Hall said. “I didn’t want to sign in the early period. I wanted to keep my options open, but I believe that (Appalachian State) was the right choice.”

Hall said after his spectacular high school career at Thompson, he is not going to change anything from what has brought him to this point.

“I will continue to do what I do and not change anything,” Hall said. “I will be coachable and listen to my coaches and continue to work hard.

Thompson finishes No. 1 in baseball poll

By MICKEL PONTHIEUX / Sports Reporter The Thompson Warriors baseball team took the No. 1 ranking for the third consecutive... read more