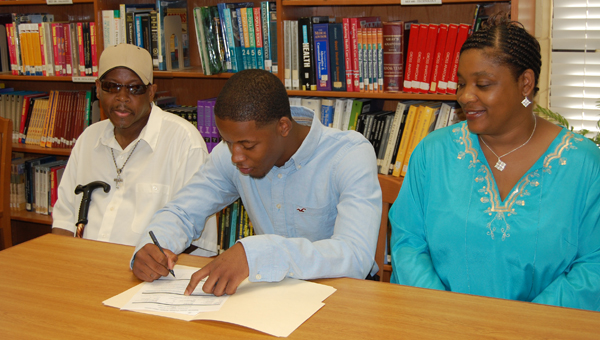 Vincent’s Anterio Rogers will trade in the black and gold of the Yellow Jackets for the navy and white of the Cougars after signing with Lawson State Community College to play basketball April 17.

Rogers has been a major key to the Jackets’ success on the basketball court for the past four years, finishing his career with over 1,300 points, 500 rebounds, and 500 steals. Rogers led the Jackets in every major category except points, averaging 5.3 rebounds per game, 5.0 assists per game, 6.2 steals per game, and 14.4 points per game during his tenure at Vincent.

“[Rogers] is really the ultimate package for us in terms of athleticism, effort, and attitude,” Hadder said.

Rogers celebrated his accomplishments surrounded by teammates, coaches, and family, all of whom agreed that he would be greatly missed on Vincent’s court next year, but excited that he will still be close enough to have the opportunity to watch him play.

“It feels good to know I still get to continue to play and that I can still have [family and friends] to come be in the stands,” Rogers said.

FROM STAFF REPORTS The Vincent Yellow Jackets could only muster three hits in a 3-0 loss to Jemison April 13... read more