Who will work for your kids? 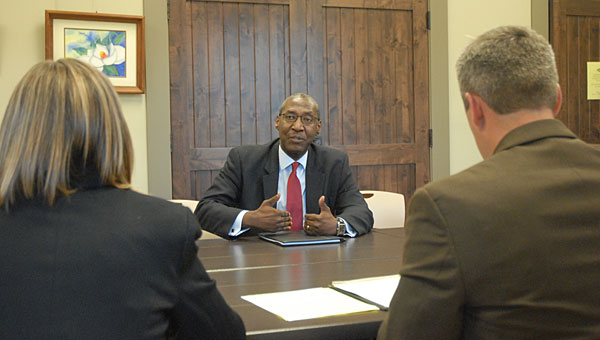 Alabaster Board of Education candidate Derek Henderson, center, speaks with Alabaster City Council members during an April 18 interview at the Alabaster Senior Center. Henderson was one of five candidates who interviewed for the vacant BOE spot on April 18. (Reporter Photo/Neal Wagner)

The Alabaster City Council is set to appoint a candidate during its May 6 meeting to fill a vacant spot on the city’s School Board after council members interviewed the top five candidates for the spot on April 18.

“We’ve got a team in place right now,” City Council President Scott Brakefield said of the School Board. “Now, you’ve got to make sure you put that good (new) team member in place.”

Starling, a photographer who regularly attends and volunteers for Alabaster school-related functions, said he would like to improve Thompson Middle School’s gifted education program and Thompson High School’s business-related offerings.

Henderson, a retired State Farm insurance employee and past president of the THS quarterback club, said he would work with area colleges and universities to offer advanced placement classes for THS students, and said he would like to strengthen career and technical offerings in the schools.

Jim McClain, a former city councilman and member of the city’s Water Board, said he would work with other Alabaster School Board members to seek out and implement successful practices used by other school boards.

Alexander-Williams, a systems engineer with Wells Fargo, said she would like to bring more technology to the city’s schools, such as Kindle tablets, iPads and computers to assist in reading and math lessons.

Dennis, a THS alumni who has multiple family members who currently either work at or attend Alabaster schools, said school safety was one of his top concerns, and said he would like the School Board to conduct a study to learn ways to “keep our children safe.”

Brakefield said City Council members will discuss the candidates’ interviews during an April 25 work session at the Alabaster Senior Center before making an appointment on May 6. During its May 6 meeting, the council also will decide if it will reappoint current School Board member Ty Quarles to a five-year term.

Thompson senior Nick Hall became the first Warrior wrestler to sign a Division I scholarship when he signed with Appalachian... read more